Beale on track in Cairns

Victorian Jeremy Beale is taking the top seed mantle in his stride, moving into a seventh consecutive ITF Futures semifinal on Friday. 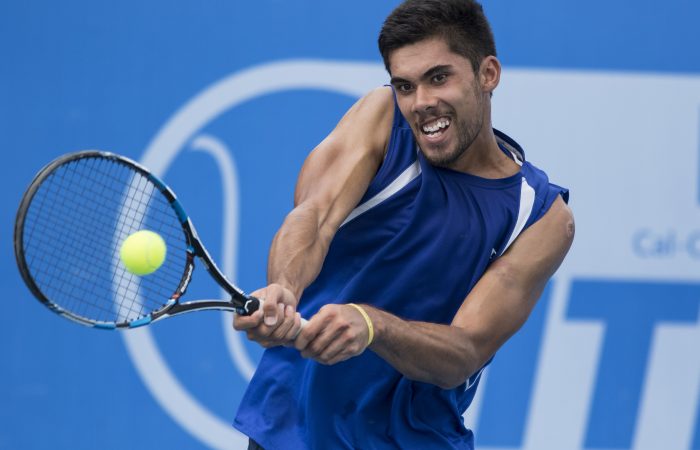 The Victorian is enjoying an outstanding run of recent times, Friday’s win catapulting him into his seventh consecutive ITF Futures semifinal – a streak which saw him take out the title at a USD$15,000 tournament in Jakarta last month and enter the world’s top 500 for the first time.

“I’ve been playing pretty well lately,” Beale, 23, said.  “Every match I walk into now I just go in there thinking ‘I’m going to make this guy work’ and if he beats then, too good on the day, but I’m not about to hand over the match.”

Being the favourite for the tournament is unfamiliar territory for the Victorian who has never before been seeded first. “It‘s a little bit of added pressure but I’m handling it OK,” he said. “It’s the hard work paying off and now it’s showing on paper so it’s good.”

Beale didn’t have things all his own way against the fifth-seeded Hoyt however, with the Brit serving for the first set before Beale surged.

“I was hoping he’d go away a little bit after that but he didn’t,” Beale said of the 7-5 2-6 6-3 victory. “But I was expecting a tough fight so I was there mentally throughout the whole match.

“I was happy to get through in the end.”

Beale now faces another Brit for a place in Sunday’s final, after third seed Brydan Klein proved too much for Japan’s Issei Okamura (No.8).

“He’s very experienced so we’ll see how it goes,’ Beale said of his next opponent, a former world No.170.

Fellow Victorian Jacob Grills (No.7) was clinical in reaching the semifinals, dispatching American Dusty Boyer 6-1 6-2 to set up a clash with wildcard Jayden Court; the Queensland teen fortunate to move ahead after his British opponent, sixth seed Ryan Storrie, was forced to retire ahead 6-2 3-2.

The women’s semifinals will be an all-Australian affair after Kaylah McPhee continued her strong run, beating British Jodie Burrage in straight sets. In the longest match of the tournament, fellow Queenslander Kimberly Birrell could not follow her into the final four after Alison Bai battled her way back into the match, saving multiple match points and prevailing in a final set tiebreaker.

The unseeded McPhee will now take on Astra Sharma (No.4) while Bai – who defeated top seed Olivia Rogowska in the first round – meets Destanee Aiava, after the third seed recovered from a one-set deficit to beat qualifier Seone Mendez.