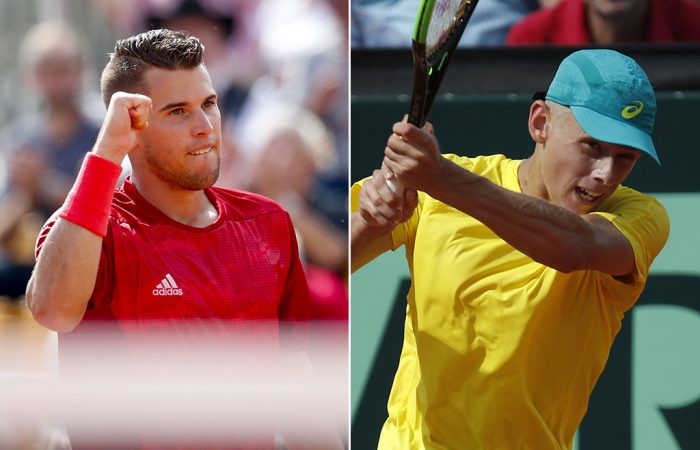 Austrian world No.8 Dominic Thiem was full of praise for Alex de Minaur after being given the fright of his life by the Australian teenager in their Davis Cup reverse singles rubber.

Thiem beat the 19-year-old 6-4 6-2 3-6 6-4 in an absorbing match that lasted almost three hours on outdoor clay at the Messe Congress complex in Graz on Sunday.

The 25-year-old French Open finalist, who also ended Rafael Nadal’s 51-week unbeaten run on clay at the Madrid Open in May, delivered his nation an unassailable 3-1 lead to ensure they’ll be seeded in February’s qualifying round for the new-look competition.

Despite the defeat, De Minaur’s performance against one of the best players in the world on home soil and on his favoured surface is another positive sign in what’s been a magnificent 12-months for the world No.38 from Sydney.

“At the US Open he played really good which was on a pretty slow hard court so I was not that surprised by how well he played today.”

Having raced into a two-set lead, Thiem looked on course to wrap up a routine victory similar to his dismantling of Jordan Thompson in Friday’s opening rubber.

But the resilient de Minaur took out the third set and then had two glorious opportunities to force the match to a decider after twice breaking Thiem’s serve.

However, the Austrian broke back immediately on both occasions then saved his third break point of the set before holding his nerve to close out the win.