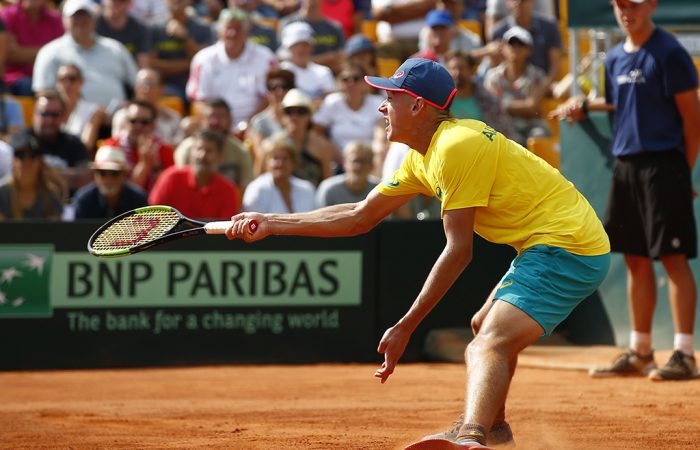 Dominic Thiem has seen off a spirited Alex de Minaur to seal victory for Austria over Australia in the Davis Cup Play-off tie in Graz.

“I think I was really close. Being up a break in the fourth, I played not my greatest game and then I still had another break point at 4-4 so I really thought I was points away from going to the fifth and then anything could have happened,” De Minaur said.

“At the end of the day, I’ve just got to learn from these things. They do sting a lot but it’s a learning process for me and hopefully next time I’m in the same situation I don’t make the same mistake.”

The victory means that next year, when the Davis Cup competition structure is reformed, Austria will be seeded in February’s 24-nation qualifying event, played in the current home-and-away format. Australia will be unseeded.

The 12 winning nations will advance to November’s finals.

Thiem, who reached the Roland Garros final earlier this year and ended Rafael Nadal’s 51-week unbeaten streak on clay in May, fought back from 3-1 down to take the opening set and then ominously raced into a 4-0 lead on his way to winning the second.

But De Minaur, showing the battling qualities that have become his trademark, responded magnificently to stun the 6,000-strong home crowd by claiming the third set – much to the delight of his mentor, Australian skipper Lleyton Hewitt.

Thiem threatened to take control of the tie early in the fourth set, but De Minaur saved two break points to level at 1-1 with a gutsy drop shot.

With the Australian’s confidence beginning to grow, the usually steely Thiem became more and more ragged and a backhand down the line that was long on break point gave De Minaur the lead.

However, he was unable to capitalise and Thiem hit back immediately to level to set only for the Sydneysider to claim the next game on the Austrian’s serve and lead 4-3.

But once again Thiem regrouped to level the set and after holding finally holding his serve, he broke de Minaur’s dogged resistance with a fierce backhand return that drew an error to win the match.

“But I couldn’t be prouder of my team – the guys that played, the guys that didn’t play. Everyone came here, they prepared, they did absolutely everything that we asked them to and they left it all out there.

“The can walk for the rest of the year taking a lot of positives out of these couple of weeks.”