The inaugural National Indigenous Tennis Carnival has wrapped up in Darwin. 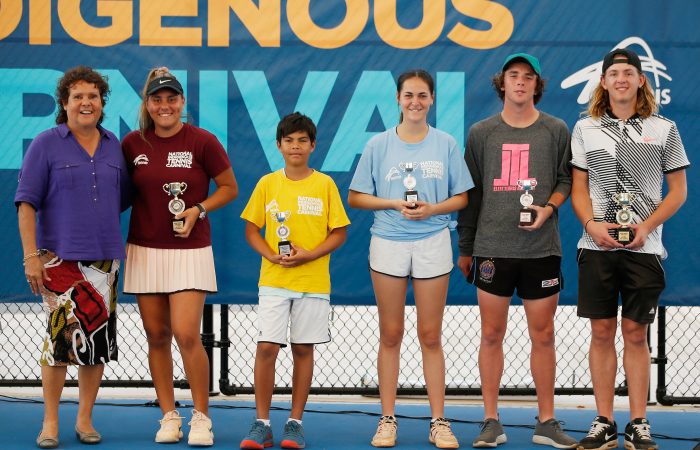 “The inaugural National Indigenous Tennis Carnival was an amazing event. We had nearly 200 players from every state and territory making it the largest gathering of Indigenous tennis players in one place which is something we are really proud of and we hope we can continue to grow this great event each year,” Gibson said.

“It was amazing for Darwin to be able to host an event like this and the community really rallied behind the Carnival, it’s not every day that locals get free access into all elements of the event including a concert by Baker Boy but I’m glad we were able to bring that for Territorians.”

“I didn’t think I was going to be alive to see an event like this where you have Indigenous kids from all over Australia coming together for this kind of tournament, and it’s wonderful,” Evonne Goolagong Cawley said.

“I’d like to thank everyone for putting on this event, we’re working with Tennis Australia and the states to try and get more Indigenous kids playing this wonderful game. It’s all about creating better lives for Indigenous kids through tennis.”

Fifteen-year-old Mikayla Zahirovic was honoured to be named the first ever winner of the Evonne Goolagong Cawley Medal of Excellence.

“It was really good to get the win today, coming out I was a bit nervous but as I got into it I just played my own game and felt in my skin which helped with the end result,” Zahirovic said.

“To get the first ever Evonne Goolagong Cawley Medal of Excellence feels amazing, my goal in tennis is to see where I can go and I’d like to make it pro one day and hopefully follow in Evonne’s footsteps.

“It’s been an amazing experience, a really good competition and I played well throughout. I also found out I had family here which was pretty special so I’m really looking forward to coming back next year.

“I think the off-court stuff has also been really cool, some of the kids who have come from all different communities don’t usually get to experience some of the stuff they have which is what it is all about.”

“Yeah it was really good to get the win today and become one of the first champions of the National Indigenous Tennis Carnival, it feels really special,” Marlin said.

“It was a pretty tough match, I don’t think the score reflected some of the rallies we had, I just tried to be a strong competitor, make him play and I guess that worked well for me.”