Ash Barty cannot convert her chances as she loses to eighth seed Karolina Pliskova in the US Open fourth round. 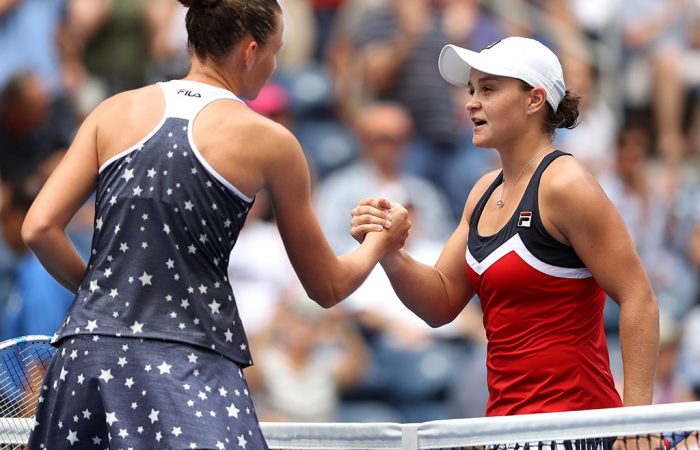 Ash Barty’s US Open campaign is over following a straight-sets defeat by former finalist Karolina Pliskova in the fourth round.

The eighth-seeded Czech showed her class in a 6-4 6-4 victory over the Australian. No.1, despite being under pressure for much of the match on Sunday.

Barty won just about everywhere but on the scoreboard, striking 29 winners to Pliskova’s 16,  six aces to four, and offering up only two break points on serve.

Tellingly though, Barty was unable to capitalise on any of eight break-point chances, while Pliskova converted both her opportunities, one in each set, over the course of one hour and 24 minutes.

“It’s disappointing because I know that wasn’t my best tennis today that I’ve played across the past month,” Barty said.

“But she did play the big points better today.”

Despite her exit, Barty’s breakout Grand Slam run ensures the 22-year-old a career-high ranking of No.15 in the world next week.

But while Pliskova was too clutch in the big moments, Barty paid dearly for her misfiring forehand.

She dropped serve from 40-0 up in the opening game of the match, wildly overhitting a forehand with an open court gaping while down a break point.

The errors continued to flow from her favoured wing as she dragged another forehand wide while having Pliskova down 15-40 in the eighth game.

With Barty unable to break back, Pliskova served out the first set to claim the upper hand.

Serving at 1-1 in the second set, Barty double-faulted to gift Pliskova a second break point, which the Czech converted with a vicious backhand crosscourt winner.

For all her pluck, there was no break back for Barty as the 2016 runner-up edged to within two wins of a second Grand Slam final appearance in New York.

Barty remains in the hunt for a maiden Grand Slam doubles crown with the four-times runner-up through to the third round with American partner Coco Vandeweghe.

“The best part is the tournament’s still going with Coco. That’s the beauty of doubles,” Barty added.

“We get to go out there tomorrow and have some fun and keep enjoying this amazing week that we’ve had, and the last month in particular as well.”