Cilic through as De Minaur thrills in epic US Open fight 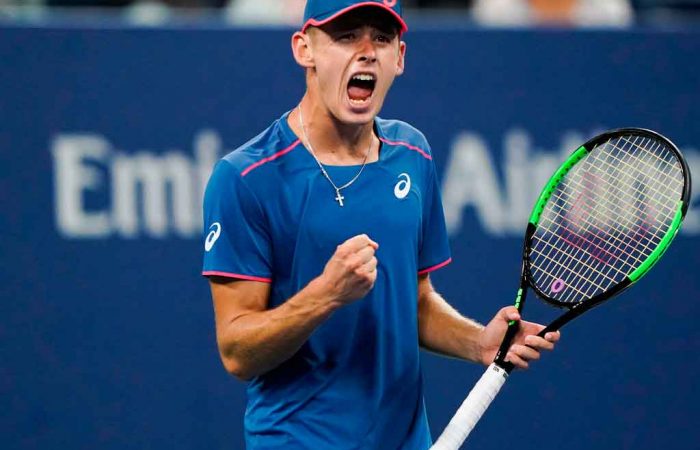 Like two prize fighters, Cilic and de Minaur traded savage blows for four hours in a baseline slugfest that started just before 10.30 on Saturday night and finished at 2.22 on Sunday morning.

Runner-up to Roger Federer at Wimbledon last year and again at the 2018 Australian Open, Cilic was finally the last man standing after mounting a ferocious fightback.

First he trailed by two sets to love, then the seventh seed rallied from a service break down in the deciding fifth set before finally delivering the knockout punch to leave John Millman flying the Australian flag in the men’s singles.

“But at the same time, it is the beauty of this sport.

“I was two sets to love up against a quality opponent today and didn’t manage to finish it off, but I left it all out there.

“I have to be proud of my efforts. I gave it every single inch of energy I had left and it is a great learning experience for me.”

With Nick Kyrgios licking his wounds after a straight-sets loss to  Federer earlier on Saturday, de Minaur had been bidding to join Millman in the second week of a Grand Slam for the first time.

Not since Lleyton Hewitt beat Pete Sampras in the 2001 final and two-time champion Pat Rafter made the fourth round had two Australians ventured so deep in the Flushing Meadows draw.

Alas, de Minaur fell a set short after a valiant display of scrambling and relentless counterattack in the face of Cilic’s awesome firepower.

Refusing to yield, de Minaur heroically saved five match points in a brutal eighth game of the fifth set to make Cilic serve it out at 5-3.

He was unable to, with de Minaur fending off another match point to break back and then level the set at 5-5.

But the Croat finally prevailed on his seventh match point to seal a famous win in the fourth-latest-finishing match in US Open history.

His reward is a fourth-round date on Monday with Belgian 10th seed David Goffin.

“Incredibly happy. It was an insane atmosphere,” Cilic said.

“(De Minaur showed) incredible spirit. He was fighting his heart out and it was just an insane match and what a comeback he made from 5-2 (in the fifth set).

“He played some amazing tennis and he really was a couple of points away from the victory and I was just a little bit lucky today.”