Kyrgios ready for Federer challenge at US Open

Nick Kyrgios is happy to be the underdog when he faces five-times champion Roger Federer in the third round of the US Open. 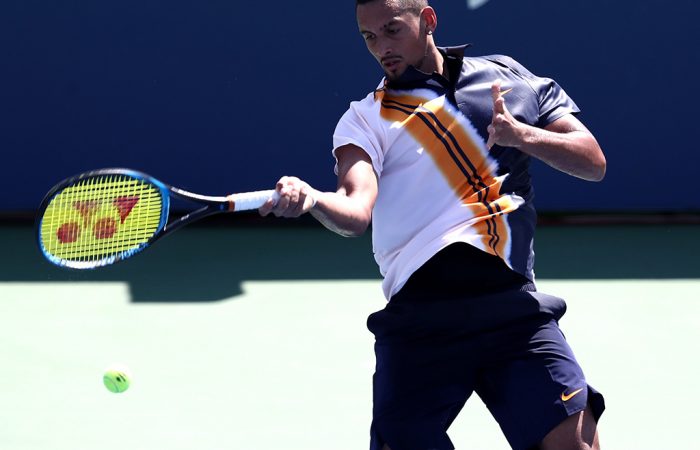 Nick Kyrgios doesn’t need any kind of pep talk to fire up for Roger Federer.

Tennis’s most mercurial talent is pumped for the pair’s third-round US Open showdown on the sport’s biggest stage in New York.

“It’s going to be a lot of fun,” Kyrgios said about the blockbuster, which has been scheduled second on at Arthur Ashe Stadium at around 4am AEST on Sunday.

On a big day for the Australian men, John Millman plays Kazakh Mikhail Kukushkin in the opening match on Grandstand Court at 1am AEST – the winner to face Kyrgios or Federer.

Later in the day, Alex de Minaur is up against 2014 US Open champion Marin Cilic.

Kyrgios knows nothing less than his best will be good enough against Federer, and he believes he can win, just as he did the first time they met three years ago on clay in Madrid.

That was the first of three classic encounters that were all decided in third-set tiebreakers.

Tiebreaks (& popcorn) at the ready on Saturday…pic.twitter.com/iTiSfEGs1w

In fact, five of their previous six sets contested have been tiebreakers.

Fans can expect more of the same this time around, with Kyrgios relishing his nothing-to-lose opportunity.

“It’s always going into a match as the underdog,” he said.

“I’m going to put a lot of expectation on myself to play well. I’m not going to go out there and roll over and be happy to be out there.

“I do believe I can win. But it’s better to be the underdog than have all the pressure, for sure.”

This will be the pair’s first meeting at a slam, changing the dynamics.

As ever, Kyrgios’s explosive serve – his biggest weapon – will be key.

“His chip return is the best the game has ever seen. There has never been a better chip return ever,” Kyrgios said when asked what made Federer great.

“I think if you took that shot away, he wouldn’t be as good because he neutralises big serves as well. He turns it into pretty much instant offence.

“His serve and first shot (are) unbelievable, very unpredictable. And he’s unbelievably efficient. Never gets tired, doesn’t seem like it. His movements are so efficient.

“Those would be the three things. He’s efficient, serve and first ball, and chip return.”

For his part, Federer knows to expect the unexpected against Kyrgios and even sees similarities with himself in terms of shot-making ability.

“I think he finds it hard to not do any of those tricks,” Federer said.

“Like myself, to some extent, we need the fun, we need the drop shot, we need some variation to everything, but he takes it to the next level.”