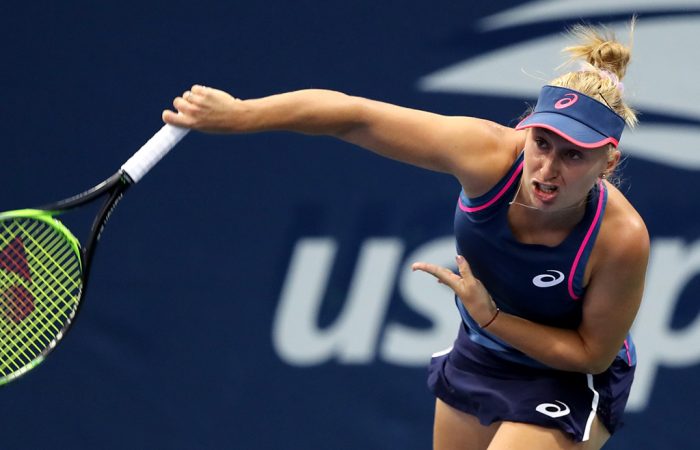 Daria Gavrilova, Ash Barty and Jason Kubler represent Australia as the second round of singles matches gets under way at Flushing Meadows on Wednesday.

ORDER OF PLAY: US Open Day 3

Daria Gavrilova v [WC] Victoria Azarenka
Second round / Court 17 / first match
Gavrilova and Azarenka have never before met, but that has not stopped Gavrilova from trying to get a glimpse of a player she admires. “I’ve always wanted to practise with her at least but that never actually happened either,” she said. “I’m really looking forward to it. I really like the way she goes about her tennis and her career.” Gavrilova thumped Sara Sorribes Tormo 6-0 6-0 in the first round and will attempt to reach the third round in New York for the first time. Azarenka, a finalist in 2012 and 2013, beat Viktoria Kuzmova in her opener; she is currently ranked 79th as she works her way back after being sidelined for several months due to a custody dispute involving her young son Leo.

Ash Barty v Lucie Safarova
Second round / Court 17 / fourth match
The Queenslander is well aware of the danger posed by Safarova, a former world No.5 and French Open finalist in 2015. “There aren’t too many lefties (on tour) but I’ve hit enough balls with Casey (Dellacqua) in my life so it’s pretty normal for me as well,” Barty said. “I’ve played Lucie in doubles a bunch of times too, so her game is quite familiar. She’s obviously familiar with me as well. It will be extremely tough.” It will be their first meeting. Safarova, ranked No.69, has struggled with health problems in recent years but is 4-1 on North American hard courts this year. Barty enjoyed a solid build-up too, reaching the semis in Montreal and the third round in Cincinnati. Both won their opening-round matches in New York in straight sets.

Jason Kubler v Taylor Fritz
Second round / Court 13 / third match
Kubler will be hoping to continue his fairytale run when he takes on the inexperienced Fritz, who is just 20 years old. Fritz came through in a five-set tussle against over Mischa Zverev while the Aussie progressed comparatively easily over 19th seed Roberto Bautista Agut, winning in straight sets. Fritz is the bigger name and has been ranked as high as No.53, but Kubler is a newly-minted top 100 player after a career-best season and is feeling the best he ever has physically. “That’s probably the best best-of-five-setter I’ve had,” said Kubler, referring to his first-round win. “I’ve only had three or four of them before, but each of them I was cramping or I was pretty tired. But that one was pretty good and now I get the day off. I think I’ll be be fine.”