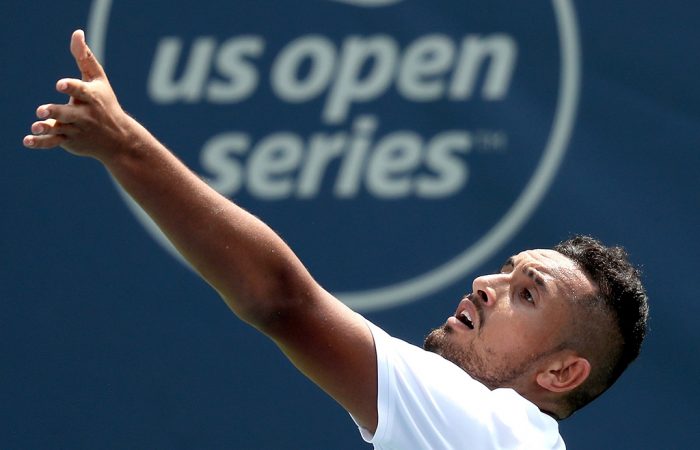 Nick Kyrgios has won his second straight three-set match to reach the last 16 at the Cincinnati Masters tournament in Ohio.

The Australian overcame a second-set lapse to beat Borna Coric 7-6(1) 0-6 6-3 on Wednesday night, extending his winning head-to-head record against the Croat to 4-1.

2017 finalist @NickKyrgios completes a roller coaster 7-6(1) 0-6 6-3 victory over Borna Coric to reach the round of 16. #CincyTennis pic.twitter.com/MIGt7yAMnP

The victory takes Kyrgios’ record in three-set matches in 2018 to 10-3 and sets up a potential third-round meeting with Juan Martin del Potro.

RELATED: Barty through to last 16 in Cincinnati

Kyrgios scraped through his opening-round match against Denis Kudla and was similarly up-and-down against Coric, who beat the Aussie in their last meeting – also in Cincinnati – two years ago.

Kyrgios played with both knees taped yet his serve delivered 16 aces and his shotmaking prowess at times stunned Coric and thrilled the crowd on the intimate Court 10.

After dropping the second set in less than 25 minutes, Kyrgios refocused in the third and broke early to take a 3-1 lead, and never let up.

Do NOT try this forehand at home.

“I know that right now I can still serve through these matches, and that’s enough for me to compete and hang with these guys,” Kyrgios told Sport360.

“At this stage, I’m just going to try and get through the US swing and then just re-evaluate where I’m at.