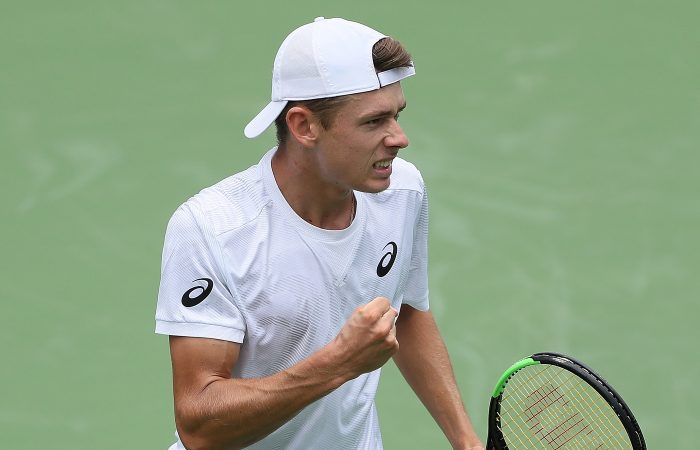 The 19-year-old Australian fought back from a set down against Russian 16th seed Rublev to prevail 5-7 7-6(6) 6-4 in a high-quality Citi Open semifinal.

His reward is a clash with defending champion and world No.3 Alexander Zverev in Sunday’s final.

From 6-2 down in the second-set tiebreak, De Minaur saved all four match points and won six in a row to force a decider.

💚💛 off the charts! @alexdeminaur saves four match points and defeats Andrey Rublev 5-7 7-6(6) 6-4 in an epic battle to reach the #CitiOpen final on his debut. pic.twitter.com/to9aDa2ZAW

“I just couldn’t see myself going any further. But I kept pushing myself, kept trying every single point and managed to turn that around. That’s probably the best win of my career.

“Tomorrow’s (final is) going to be a very tough match against a very high-quality opponent and I’m just going to try and recover and leave it all out there again.”

It will be de Minaur’s second appearance in an ATP Tour final, having reached the decider at the lower-tier Sydney tournament in January.

It continues a dramatic rise for de Minaur in 2018.

He started the year ranked No.208 but he is set to crack the top 50 for the first time when rankings are updated on Monday and he will go to No.33 if he beats Zverev.

All four semifinalists at the Citi Open – Zverev, de Minaur, Rublev and Greece’s Stefanos Tsitsipas – were 21 or younger. It is the first time four players of that age have reached the semifinals of an ATP World Tour event since Buenos Aires in 1995.

While 20-year-old Rublev fell just short of reaching his first final at 500 level, he was competing in just his third tournament since a three-month hiatus due to a stress fracture in his lower back.

He was seeking a second ATP World Tour title, after claiming victory last year in Umag as a lucky loser.