Eleven-year-old Poppy from Bundaberg was treated to a tennis lesson at her local club by ANZ Tennis Hot Shots ambassdor Alicia Molik. 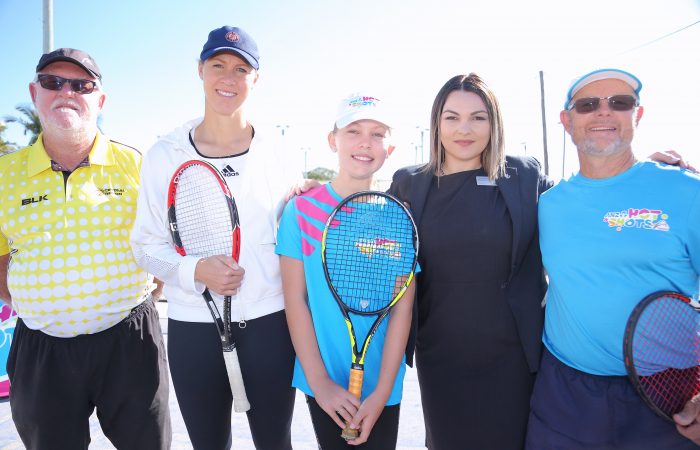 Eleven-year-old Poppy had the chance of a lifetime when she took to the court for a tennis lesson with ANZ Tennis Hot Shots ambassador and Fed Cup captain Alicia Molik on Wednesday at her local tennis club, Bundaberg Junior Tennis Association, Rotary Park in Bundaberg, Queensland.

Poppy was announced as the winner of the 2017 ANZ Tennis Hot Shot of the Year competition at an official ceremony held at Rod Laver Arena during Australian Open 2018.

The tennis lesson took place at 3.30 pm for an hour, before local budding tennis players and club members had the chance to meet Molik at 4.30 pm.

The annual ANZ Tennis Hot Shot of the Year competition recognises eight budding tennis stars from around Australia for their participation, enthusiasm and enjoyment of the game whilst demonstrating sportsmanlike qualities.

In January, the chosen tennis enthusiasts had a VIP experience at the Australian Open, including a behind-the-scenes tour of the tournament, the chance to watch some of the world’s best tennis players on court and the opportunity to rally with Molik on Rod Laver Arena.

For winning the award, Poppy won an exclusive prize of $5,000, one year of free tennis coaching as well as a visit from Molik to her local tennis club for a tennis lesson with three friends.

Entries for the 2018 ANZ Tennis Hot Shot of the Year can be submitted here.