Dylan Alcott lost on his historic debut at the All England Club while Rinky HIjikata's run in the boys' doubles event event ended in the semifinals. 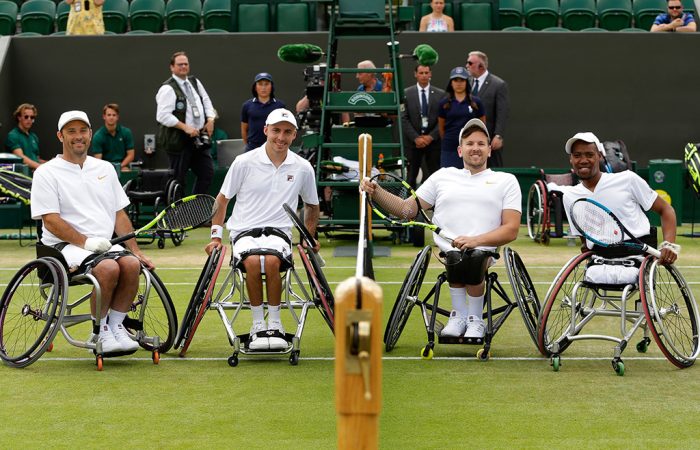 Dylan Alcott graced Wimbledon’s lawns for the first time on Saturday as part of a quad wheelchair doubles exhibition match on No.3 Court.

Yet the result was secondary to the occasion; this was the first time the quad division had appeared at the All England Club as part of Wimbledon’s wheelchair tennis program.

Alcott on Friday said that it was a dream come true to play at Wimbledon.

“I’ve been lobbying to try and build the sport and to get our division in Wimbledon and to be here finally, it’s so cool,” he said.

“Although it’s only an exhibition this year, hopefully it will graduate to full tournament next year, singles and doubles.”

On Court 12, Sydneysider Rinky Hijikata and Japanese partner Naoki Tajima lost in the semifinals of the boys’ doubles tournament.

The pair went down 6-3 7-6(4) to sixth seeds Nicolas Mejia and Ondrej Styler.

Despite the loss, this is the deepest Hijikata has gone at a junior Grand Slam event – he reached the quarterfinals in singles at Australian Open 2018 – and it came on his Wimbledon debut.

“It’s been pretty surreal. It’s organised really well, they treat the players really well, so yeah, I’ve loved it here,” he said after his quarterfinal victory on Friday.