A clash of compatriots between Daria Gavrilova and Sam Stosur kicks off a day at Wimbledon featuring seven Australians on the schedule. 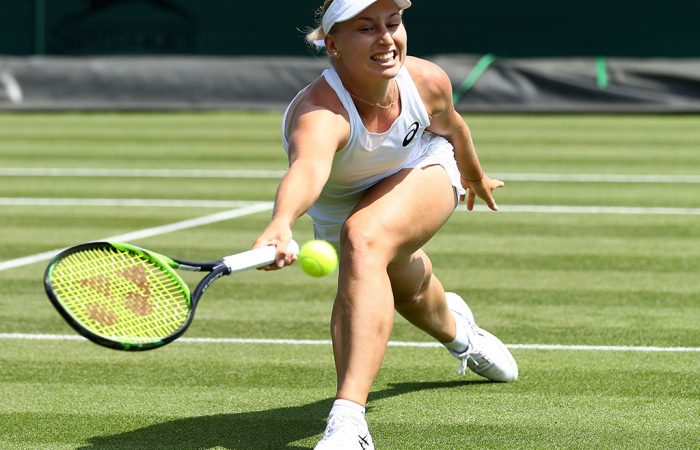 Aussie tennis fans will be spoiled for choice on Thursday at Wimbledon when seven of their own take to the courts for second-round singles matches.

At 8.30pm AEST, four will play at the All England Club when they open the day’s schedule.

TV GUIDE: catch all the action from Wimbledon!

Perhaps capturing the most interest is the all-Australian affair between Daria Gavrilova and Sam Stosur first up on Court 18.

Added Stosur: “Probably fair to say that both of us wouldn’t pick grass as our favourite surfaces. Against Dash, no matter when you play you’ve gotta be up for every point. She fights incredibly well, moves very well, she’s tenacious, she can play aggressive but her defensive skills are also very good – some of the best in the world, I think.”

At the same time, across on No.3 Court, Ash Barty will match up against the resurgent Eugenie Bouchard – who’s on a four-match winning streak after coming through qualifying – in what is a battle between the 2011 and 2012 Wimbledon junior champions.

“I haven’t seen Genie play for a while. I played her in Miami earlier last year,” said Barty, a match she won in three tight sets to reach the second round.

On Court 14, Alex De Minaur will continue his first ever Wimbledon main-draw campaign when he takes on Frenchman Pierre-Hugues Herbert.

“I have been playing some really good tennis on grass, and my over Marco (Cecchinato) really helps me,” De Minaur said after defeated the No.29 seed in round one. “Beating a high-quality player, who is in-form, just gives me a confidence boost and I am keen to keep it going and see where it takes me.”

Following them on the same court will be Matt Ebden, who faces another French player in the form of Stephane Robert.

“I’ve sort of been around a few years now, more experienced, I know what to expect from these events, from these players, from myself, what I need to do better,” the 30-year-old said after stunning 10th seed David Goffin in his opening match.

“Even my coach after (beating Goffin), he said, well done, but get off your phone, and get organised – we’ve got two weeks.”

Later in the day at Wimbledon (roughly midnight AEST), 15th seed Nick Kyrgios will look to continue his impressive grass-court form when he plays Dutchman Robin Haase for a place in the last 32.

“I guess I’m in kind of like a happy place. I feel like I’m playing well,” Kyrgios said. “I feel like I’m one of the guys that can cause a bit of an uproar at this event. We’ll see how it goes.”

On an even bigger show court, Bernard Tomic faces a tough battle against 24th seed Kei Nishikori. That match is the fourth on the No.2 Court schedule.

“I beat Kei the last two times,” Tomic said. “In Cincinnati, where I reached the quarters two years ago. I beat him in Brisbane, too, and I think my game matches up well against his.

“I always play well here (at Wimbledon). I just need to get into a rhythm.”

Should Tomic and Kyrgios both win, they will clash in the third round.