Every set required a tiebreak, but Milos Raonic got the better of Australia's John Millman in all of them to reach the last 32 at Wimbledon. 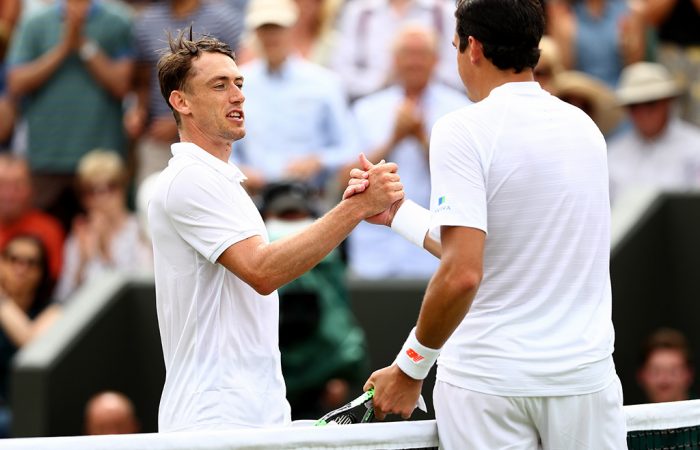 In his trademark fighting style, John Millman pushed Milos Raonic all the way before going down in three tiebreaks on Wednesday at Wimbledon.

Raonic is a former Wimbledon finalist (2016) and also reached the semis in 2014 and quarters last year. The lawns of the All England Club are tailor-made for his fearsome serve and net-rushing instincts; he finished with 34 aces and came in 48 times.

Yet Millman made the former world No.3 work hard before ultimately surrendering in two hours and 38 minutes on No.2 Court.

“The way I’ve been hitting the ball, especially from Eastbourne going in to now, the way I built into this week, I did honestly believe I could beat a lot of guys in the draw,” Millman said.

“And that’s just the difficult thing (to accept), to be honest with you. It’s not me trying to be cocky or (over) confident; I just thought there were a lot of guys I could beat who were still in the draw. Unfortunately I came up against a pretty tough test in the big Canadian.”

This was a serving clinic, especially in the opening set. Neither player faced a break point, yet Raonic found himself with a one-set lead after a steadier performance in the tiebreak.

Ditto set two, until the seventh game; here, Millman sprayed errors in a game he’d rather forget and dropped serve for the first time. Two games later, Raonic was serving at 5-4 for a two-sets-to-love lead.

Millman didn’t go away, digging out some impressive returns and benefitting from a dip in the Canadian’s level to break back for 5-5.

But in the second tiebreak, errors again hurt the Queenslander. He missed a backhand well long for 3-5, dumped a forehand into the net for 4-6 (and two Raonic set points) and erred on another backhand to give the 13th seed a big lead.

Both players has chances to break in the third set, but neither could convert.

And so to a tiebreak again, where Raonic kicked up a gear and used his power to overwhelm the Aussie. He struck a first serve so hard at Millman’s body on the first point that it knocked Millman off his feet. An ace and an overhead winner opened up a 4-1 lead, and he then smoked a forehand return to draw an error from Millman for 5-1.

Millman would save two match points but a third was beyond him; Raonic chipped and charged before putting away another overhead to seal victory.

“Unfortunately, a couple of points in those tiebreakers didn’t go my way. And that’s the challenge you face when you’re playing someone like Milos,” Millman said.

“I thought he served extremely well. Then when I did make him play some returns I thought he volleyed really well today too, he picked out a couple from his toes.

“Credit to him. I did everything I could out there.”