In-form De Minaur to lay it on the line

Having won 11 of 13 grass-court matches coming into Wimbledon, Alex De Minaur will look to continue his momentum when he faces recent Roland Garros semifinalist Marco Cecchinato. 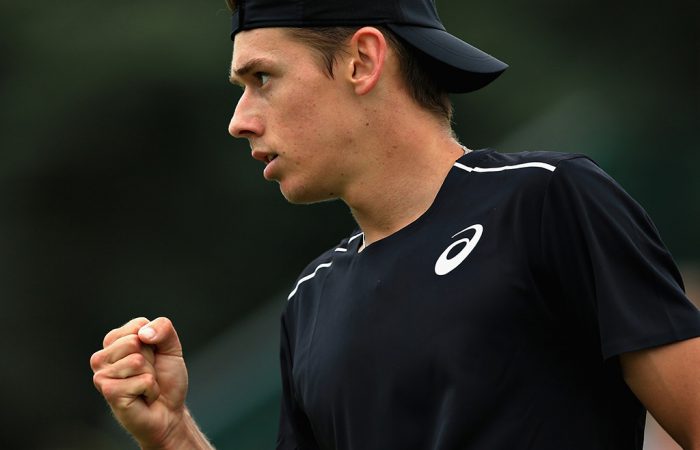 He hustles like Lleyton Hewitt, is mentored by the former No.1 and now Alex de Minaur is even talking like him on the eve of his Wimbledon main-draw debut.

“I’m just going to go out there, leave it all out there and enjoy the moment,” De Minaur said ahead of his clash with surprise French Open semi-finalist Marco Cecchinato on Tuesday.

“He’s obviously a player who’s in great form. Even on grass in Eastbourne he played some really good tennis.

“But at the same time I feel like I’m playing some great tennis as well, so it’s going to be an interesting match.”

Hewitt spent two decades leaving it all out there and “laying it on the line” and knows he has a special talent on his hands in De Minaur.

The teenager has a penchant for grass, making the junior final at The All England Club in 2016 ago and earning his own way into the draw this year after surging up to No.77 in the world.

“I feel very comfortable on this surface and I feel like I really enjoy it out there. And I’ve been playing some great tennis and I’ve had a great preparation for Wimbledon.

“It is my first main draw at Wimbledon, and that’s something that I’ve always dreamed about.”

De Minaur grew up in Spain and victory over Cecchinato would edge the Sydney-born 19-year-old to within a win of a possible third-round date with mighty Mallorcan Rafael Nadal.

“I’m really looking forward to just getting out there and we’ll see what happens,” he said.