Ash Barty and Sam Stosur advance to the second round at the WTA event in Nottingham. 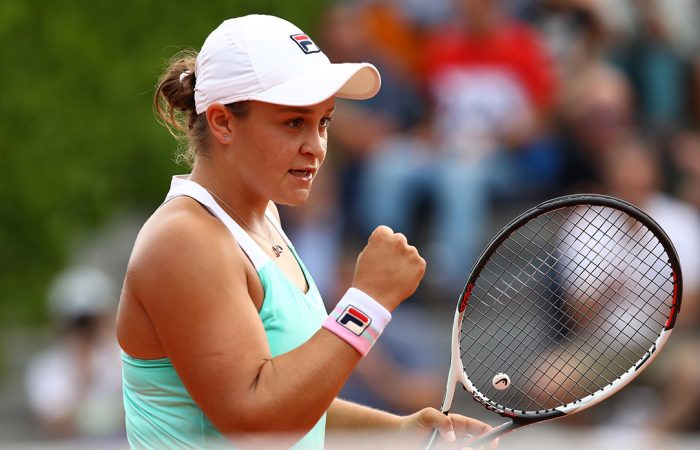 Australia’s No.1 Ash Barty has marched into the second round of the Nottingham Open with a straight-sets victory over Stefanie Voegele.

Barty, the top seed at the English grass-court tournament, stepped up her build-up to Wimbledon with a powerful display to beat her Swiss opponent 6-3 6-3.

A two-time quarterfinalist at the event, Barty used her trademark slice to good effect to set up a first meeting with big-serving Duan Yingying of China in the second round.

Barty has made no secret of her eagerness to return to the lawns and revealed she has already taken the opportunity to try a hit-out at Wimbledon since arriving from Paris.

The 22-year-old, who lost to Serena Williams in three sets at Roland Garros, admitted she was delighted with her opening victory in Nottingham.

“It just brings out a little bit of extra confidence, knowing that I did play well this time last year,” Barty told the WTA website of her past grass record.

“I feel I can try to do that again, and we’re off to a good start.

“The beauty of grass-court tennis is that you get better with matches, and there’s no better way than to get out there and try to fix up your game.”

Barty played down her top seeding and admits she will just “take it in my stride”.

“I had that experience for the first time just a few weeks ago in Strasbourg, and I felt I played well there,” she said.

“It was a different feeling seeing my name at the top of the draw – but at the end of the day I’m in the draw, just like everyone else is.”

Sam Stosur, a wildcard entry into the Wimbledon lead-up tournament, also reached the second round after receiving a walkover when seventh seed Zarina Diyas of Kazakhstan was forced to retire with a left knee injury when 2-1 down in the first set. Stosur now plays British wildcard Katie Boulter in the second round.