Stosur and Barty through to Strasbourg quarters 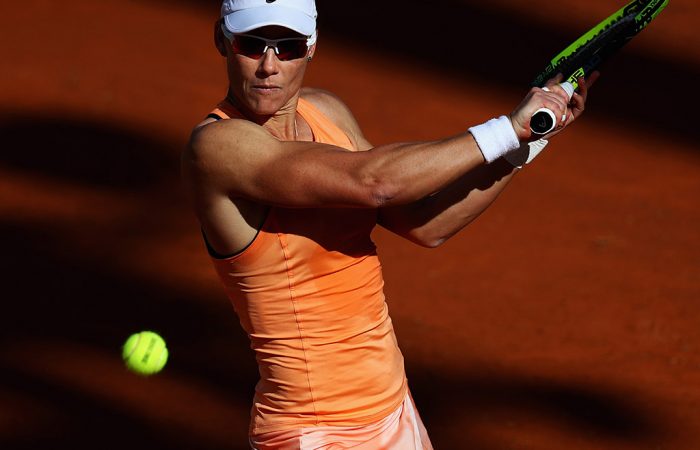 Top seed Ashleigh Barty and two-time champion Samantha Stosur are powering towards an all-Australian title showdown at the Strasbourg International.

Barty needed barely an hour to advance to her maiden WTA clay-court singles quarter-final with a 6-1 6-3 destruction of local hope Pauline Parmentier, after Stosur downed the pair’s Fed Cup team-mate Daria Gavrilova 6-3 6-4 in her second-round match.

Boding well ahead of Sunday’s French Open start, neither Barty or Stosur have dropped a set this week.

Stosur and second seed Gavrilova share the same manager, same sponsor and on Wednesday were sharing the same outfit on the same court.

Little wonder Gavrilova was left lamenting the same outcome as both last year’s final, too.

“It’s tough to play a team-mate and a friend. Unfortunately we’ve played way too many times this year, but we both go out there and try and do our best,” Gavrilova said.

“Pretty much we don’t have secrets. She knows me well, her coach knows me well and it’s the same for me; I know her game pretty well.”

Wednesday’s was their third encounter in 2018, with Stosur again avenging her second-round loss to Gavrilova in Sydney with a second straight defeat of the 23-year-old on clay.

The former French Open finalist also beat won their contest in Prague this month, although Gavrilova was forced to retire early in the deciding set after injuring her ankle.

This time she had no answer to Stosur’s ferocious firepower.

“She was playing well and she was serving huge today,” Gavrilova said. “At first today, I was thinking this speed (clock) thing is not working.

“But then I compared her speed to mine and I thought she was playing really big today. She was just being big and aggressive and that put me under a lot of pressure.”

Feeling right at home, Stosur will be gunning for her 14th straight win in Strasbourg when she faces Slovakian fifth seed Dominika Cibulkova in the quarter-finals on Friday morning.

“I don’t know, I just seem to play well here,” Stosur said. “I feel good on the court. I feel good and relaxed off the court.

“So I think anywhere you feel comfortable, you’re bound to play good tennis and I’m just happy I could keep it going this year.”

Barty’s progression to the quarters, after making the semifinals last year, left the French press wondering if the Australians held their annual general meeting at the tournament.

“We play many tournaments all the same. But, for some reason, I think Australians like being here,” Stosur said.

“And like last year, we’re getting through the rounds, which is a good feeling, and hope we can keep it going.”

Barty plays Qiang Wang on Thursday night for a spot in the last four.