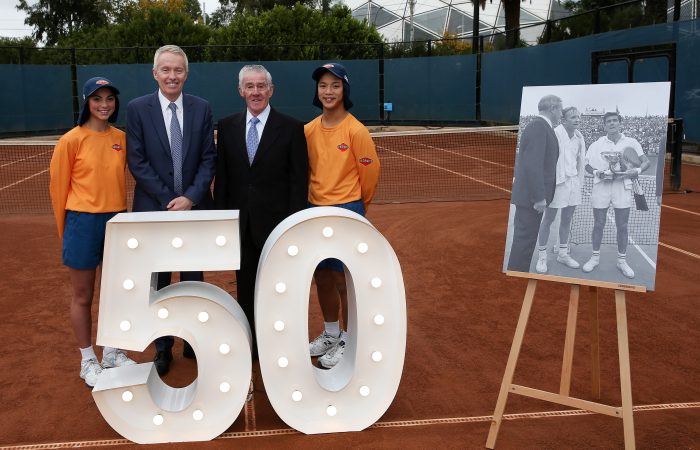 One of the greatest tennis players of all time Ken Rosewall AM MBE was honoured at Melbourne Park today, 50 years since his historic win at Roland-Garros in 1968.

The 83-year-old was congratulated on his golden anniversary by Craig Tiley, Tennis Australia CEO, and Australian Open ballkids Emma Wong and Aidan Chu, who will travel to Paris on Thursday to join the official Roland-Garros ballkid squad.

Rosewall went down in history as the first man to win a Grand Slam singles title in the Open Era. Fondly known as ‘Muscles’, Rosewall’s tennis career spanned an incredible 27 years, from 1951 to 1978.

“I’m thrilled to congratulate Ken on the 50th anniversary of his win in Paris,” Craig Tiley said.

“Ken is a true representative of Australia’s golden age of tennis and one of our most outstanding legends of the game. He’s made an enormous contribution to our sport and I’m delighted he will have the opportunity to celebrate this milestone in Paris next month.”

In 1953, aged just 18, Rosewall won his first Grand Slam title, the Australian Championships, and went on to win both the singles and doubles titles at Roland Garros that same year.

In 1968, 15 years later, he hoisted the fabled trophy in Paris again, defeating fellow Australian Rod Laver in four sets, and partnered with Fred Stolle to also win the doubles crown.

This outstanding record was achieved despite Rosewall being ineligible for Grand Slam competition for 11 years after turning professional in 1957, and missing at least 44 Grand Slam title opportunities.

He still holds the record for being the oldest man, at the age of 37, to win a Grand Slam singles title in the Open Era.

Rosewall is also patron of the Australian Tennis Museum, based at Sydney Olympic Park Tennis Centre.