Australia's Daria Gavrilova fights back to beat third seed Garbine Muguruza in the early hours at the Internazionali BNL d’Italia in Rome. 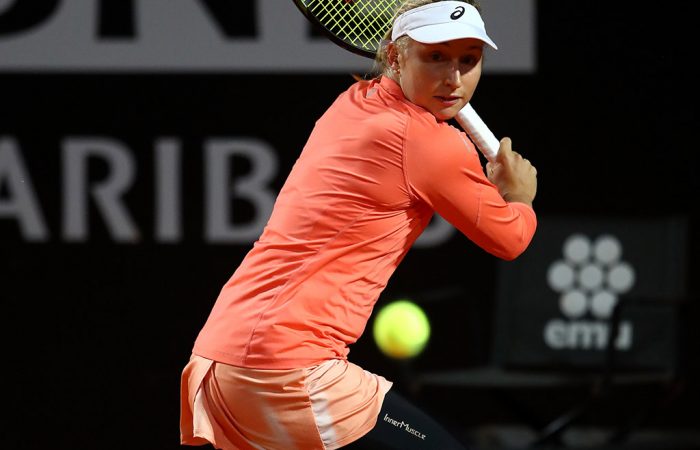 Daria Gavrilova claimed the fourth top-10 win of her career with a stunning fightback against third seed Garbine Muguruza at the Internazionali BNL d’Italia in Rome.

The Australian number two recovered from a set down, and from 4-0 down in the final set, saving two match points to seal a 5-7 6-2 7-6(6) victory, after three hours and nine minutes, at 2am local time.

Gavrilova will be back in action later on Thursday when she takes on three-time champion Maria Sharapova for a place in the quarterfinals.

The first set alone took 67 minutes as Muguruza came back from 4-2 down, winning the last three games in a row to clinch it.

With the time approaching 1am in Rome, the Spaniard looked a forlorn figure after dropping a second set in which she failed to convert any of eight break points, including seven in a dramatic 12-minute game at 4-2.

Muguruza had arrived in Rome with a mediocre 2-2 record on clay this year and it was to her credit that she dug in, cut out the string of forehand errors that had afflicted her and took control of the final set.

The 2016 French Open champion quickly established a double-break lead at 3-0 and saved a break point on her way to 4-0.

If it appeared that the Spaniard had done enough, Gavrilova had other ideas, fighting for every point as she clawed her way back to level at 4-4.

Again Muguruza pushed for the finish line, breaking at 5-5 to serve for the win, but a double-fault on match point summed up her erratic form and a tiebreak was required.

With the clock now ticking past 2am local time, Gavrilova refused to submit, battling back from 4-2 down and saving a second match point thanks to a brilliant backhand down the line that Muguruza could not control.

The Australian was more clinical when her chance arrived, pressuring Muguruza into a volleying over the baseline to claim another landmark win in the Italian capital.

Gavrilova had reached the semifinals, last 16 and quarterfinals on her three previous visits to Rome’s Foro Italico, and will have high hopes of another extended run.