De Minaur eases through in Portugal 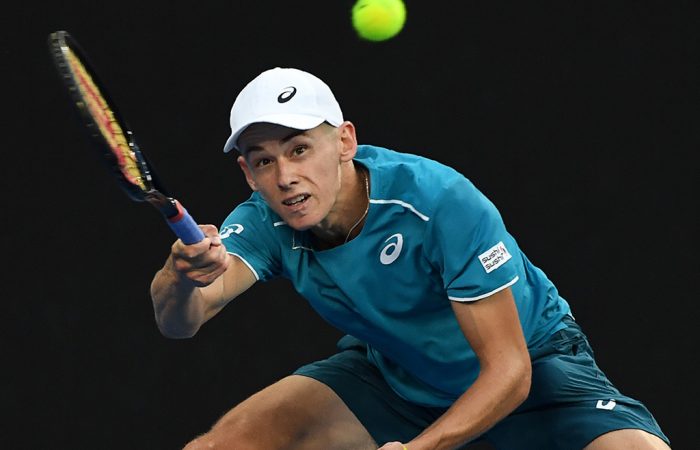 Australian teenager Alex de Minaur has continued his stellar 2018 with a straight-sets win over Gastao Elias at the Estoril Open in Portugal.

Brisbane International semifinalist de Minaur, who received a wildcard for the claycourt event, did it easy against the Portuguese player, winning 6-3 6-1 to set up a round-of-16 clash with British third seed Kyle Edmund.

It was the Aussie’s first tour-level victory in clay.

“I played a very high level match against a high level opponent, especially on clay,” he told milleniumestorilopen.com.

“There were tricky conditions out there. I just tried to weather the storm early, I was able to win a lot of those long points and I stayed solid through that first set. The the last set I was able to play better tennis so I’m very happy with my level.

“I know Kyle and I’ve trained with him a lot. He has a very high quality tennis so my next round will be a very tough match, but I’m looking forward to it. I’m going to leave it all out there and we’ll see what happens at the end of the day.”

Pedro Sousa upset Frenchman Gilles Simon to advance while Frances Tiafoe of the United States fought back from a set down to eliminate countryman Tennys Sandgren.

South Africa’s Kevin Anderson (8) and Pablo Carreno Busta of Spain (11) are the highest-ranked players contesting the claycourt tournament on the Portuguese Riviera.

Bernard Tomic is set to slip to his lowest ATP ranking since 2010 after bowing out of the Istanbul Open against sixth seed Viktor Troicki.

Tomic took the first set 6-3 but went missing n the second, losing 6-0 before fighting back in the third but ultimately falling short.

Serb Troicki, who made the Istanbul semifinals last year, hit 13 aces and broke the Australian five times to prevail 3-6 6-0 7-5 in just under one hour and 50 minutes.

Defending points after reaching the quarterfinals last year, Tomic – who lost to top seed Milos Raonic in the last eight – is set to fall to No.233 in the world, his lowest ranking since June 2010, when he was ranked No.246.

Argentina’s Marco Trungelliti fought back from a set down to beat Sweden’s Elias Ymer.