Sam Stosur helped launch this year's edition of the ANZ Tennis Hot Shots Racquet Roadshow which will see 110,000 racquets given to first-year primary school students by the end of 2018. 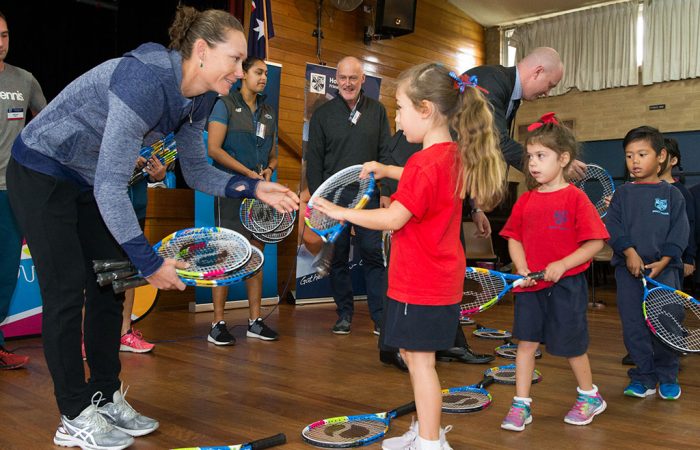 Grand Slam champion Sam Stosur on Tuesday launched the 2018 edition of the ANZ Tennis Hot Shots Racquet Roadshow which will see 110,000 racquets in the hands of first-year primary school students by year end, thanks to ANZ.

“Tennis was such an important part of my childhood and it’s fantastic to see kids pick up a racquet and get involved in the sport through the ANZ Tennis Hot Shots Racquet Roadshow,” Stosur said.

“With more than 300,000 kids actively participating in grassroots tennis it’s just another way to encourage more kids to be active and healthy and pick up a sport they can play for a lifetime.”

The annual tour across Australia will this year see tennis ambassadors and legends Todd Woodbridge, John Fitzgerald and Alicia Molik, along with local ANZ representatives, visit more than 30 schools and take part in on-court tennis clinics in every Australian state and territory.

ANZ Tennis Hot Shots and Tennis Australia’s School Partnership Program aims to encourage more children to pick up a racquet and learn tennis as part of their health and physical education curriculum.

ANZ’s ongoing support of the initiative has already seen 80,000 racquets delivered to first year primary school students since January 2015, with a further 30,000 to be delivered in 2018.

“We are extremely pleased to see a further 30,000 racquets will be delivered to students across Australia during the second year of the ANZ Tennis Hot Shots Racquet Roadshow. This ongoing initiative shows our continued joint commitment with ANZ to increasing tennis participation and ensuring kids are active at school,” Tiley said.

“Schools play a huge role in the development of children, and at Tennis Australia we want to continue to support schools in providing an environment where the health and wellbeing of students is a top priority.”

Commenting on the initiative, ANZ Group Executive Fred Ohlsson said: “We’re committed to supporting tennis at all levels around Australia through ANZ Tennis Hot Shots and are thrilled to be delivering an additional 30,000 racquets around the country to get more children playing tennis.”