Ash Barty has high hopes for the Australian team as they prepare to take on the Netherlands for a place in the Fed Cup World Group. 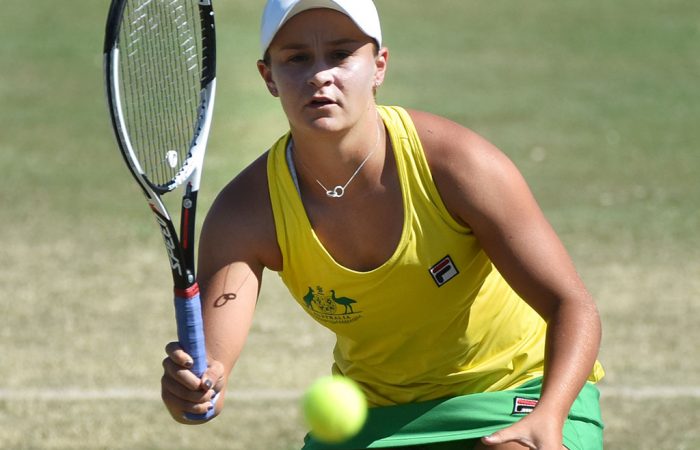 Ash Barty is ready to lead the Australian challenge when they take on the Netherlands for a place in the Fed Cup World Group at the weekend.

The play-off will take place on 21-22 April in Wollongong, with a spot in the elite eight-nation top tier at stake.

Barty will be the highest-ranked player on show at 18 in the world, while the Dutch are without their top four singles players, including the in-form world No.21 Kiki Bertens.

Sam Stosur returns for Australia after a two-year absence but Barty will be without friend and former doubles partner Casey Dellacqua, who announced her retirement last week.

“When Sam hasn’t been in the team for the last couple of years, I think Casey took on that role as the leader of the team,” said Barty.

“I think she will certainly be missed in this tie, on a personal note as well not having Case to have an afternoon coffee with and talk about some rubbish.”

The two teams met at the same stage of Fed Cup by BNP Paribas three years ago, with Bertens leading the Dutch to a 4-1 victory, a win that set them on the way to reaching the semifinals in 2016.

The Netherlands face a daunting task if they are to repeat that feat this time around, with singles players Lesley Kerkhove and Quirine Lemoine both outside the top 200.

“Fed Cup brings out the best in a lot of players and I know especially the Dutch girls seem to grow an extra leg when they play Fed Cup,” said Barty.

“I think it’s a challenge that we’re looking forward to.

“We go in as favourites and we know that if we play our best tennis, we should get the job done.”

The Fed Cup will return to Wollongong for the first time since 2003, when current captain Alicia Molik was part of the team, and Barty is keen to make full use of home-court advantage.

“It can be pretty hostile and volatile when you’re away from home in some countries,” said Barty.

“The Dutch are a very passionate country about their tennis so it’s definitely an advantage for us to be playing at home, and hopefully we can fill out that stadium and make some noise for the green and gold.”

A victory would take Australia back into the World Group for the first time since 2015, and Barty sees that as just a first step.

“For us it’s been a two-year project of winning the Fed Cup,” she said.

“We’ve been battling away for many years in World Group II and it’s not fun to be down there.

“We deserve to be in the World Group, the top eight nations in the world, and this weekend it’s really important to focus on earning our spot back up there, and next year have crack at the title.”

The Fed Cup by BNP Paribas World Group Play-off between Australia and the Netherlands is supported by the NSW Government via its tourism and major events agency Destination NSW, and Destination Wollongong