Lorbergs on a roll in Canberra

Melbourne's Genevieve Lorbergs continues her run from qualifying in Canberra, upsetting Jessica Moore in the opening round. 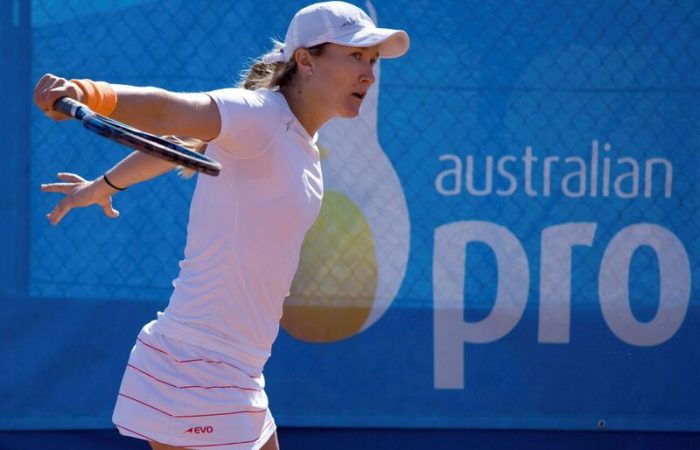 Qualifier Genevieve Lorbergs has upset West Australian Jessica Moore to reach the second round at the ACT Claycourt International #2 in Canberra on Tuesday.

The 27-year-old from Melbourne continued her solid display on the clay this week to post a 7-5 6-1 victory and set up a clash with either doubles partner Maddsion Inglis or Jaimee Fourlis.

“Jess has been around for a long time and she’s experienced on clay, but I just played my game and it definitely worked in the end. I’m super pumped about that,” Lorbergs said.

The world No.841 must now wait for the outcome of the match between youngsters Inglis and Fourlis before taking to the court on Thursday.

“I’m really excited for it. I wish it was tomorrow,” she said. “You play well, you are feeling the ball, you don’t want to stop.

“I like being the underdog,” Lorbergs added. “Those girls have all the pressure, they’ve both played Aussie Open before. I’m older in age but younger in experience on the court.”

Lorbergs also attributes some of her success this week in Canberra to reestablishing routines such as a regular meditation practice.

“I strayed away from it for a little while being on the road,” she said. “So it’s just about going back to what works for me and meditation has always been something that I’ve done a bit of. The mind is often where it’s won and lost out here.”

Following the conclusion of the Australian Pro Tour, Lorbergs is heading to Florida to help out at a camp where a number of Australian junior girls will be visiting some colleges and playing three Junior ITF events.

“I will put the coaching cap on for a bit,” she said. “I’m really looking forward to it. It gives me chance to pay it back and it makes me play better tennis as well.”

For Lorbergs, it’s also a return to her own college days in Orlando. “It will put things into perspective to see where I’ve come from,” she added. Lorbergs will also compete in a number of 25K ITF events during her US trip.

The seeds all made safe passage to the second round on Tuesday, with Zoe Hives (No.6) heading Australian interest with a 7-5 6-1 win over qualifier Ivana Popovic. Last week’s semifinalist and fourth seed, Sherazad Reix of France, and Brit Katy Dunne (No.5) were also both successful – Dunne needing to recover from a one-set deficit to defeat Queenslander Olivia Tjandramulia.