Kyrgios races to victory in Miami

Playing his first competitive match in six weeks, Nick Kyrgios showed no signs of rust as he stormed to victory over Dusan Lajovic at the Miami Open. 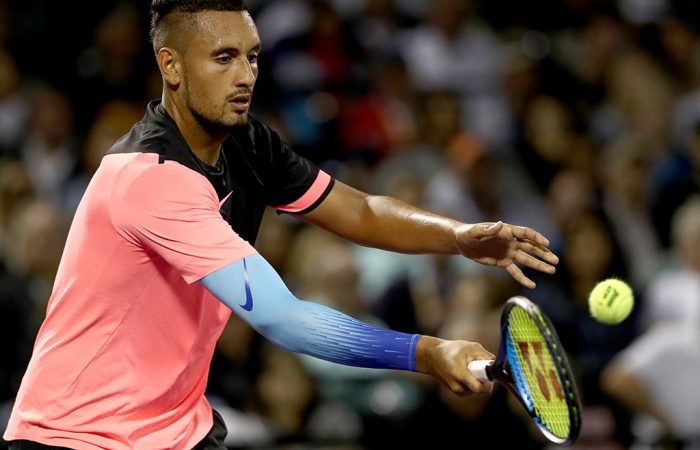 Nick Kyrgios needed less than 50 minutes to book his place in the third round of the Miami Open.

The 17th seed, who received a first-round bye, brushed aside Dusan Lajovic 6-4 6-1 to set up a third-round meeting with Fabio Fognini.

Kyrgios had not played since early February, when an elbow injury flared in his Davis Cup outing against Germany and forced him out of the recent tournament at Indian Wells.

But he looked sharp under the lights of Stadium 1 on Saturday night, smacking 21 winners to just 13 errors and dominating on serve, winning more than 80 per cent on both his first and second deliveries.

“Actually just being out there and kind of feeling up to the task to compete (was pleasing),” Kyrgios said.

“Elbow’s been feeling pretty good, but I’ve been having back spasms the last couple of days, so I had to be pretty wary of that.

“I’ve had a rough month-and-a-half, but just to get back out there and still be able to compete at this level, that’s what made me happy today.”

With games going on serve, Lajovic led 4-3 but would go on to lose nine of the last 10 games of the match.

Kyrgios broke serve in the ninth game of the first set, part of a run of seven straight games for Kyrgios which put the result almost beyond doubt.

Lajovic got on the board in the fifth game of the second set, but Kyrgios’ concentration did not waver.