Myers back in business

Back in the game after a six-month hiatus, qualifier Abbie Myers upsets top seed Nao Hibino in Canberra. 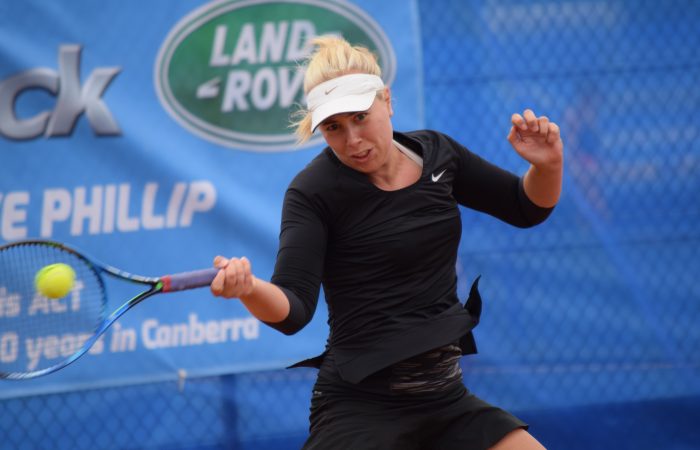 Qualifier Abbie Myers has bundled out top seed Nao Hibino to reach the quarterfinals of the ACT Claycourt International #1 in Canberra on Thursday.

“I think I was just stepping up and playing my game,” Myers said of the victory. “This is just my second pro tournament back after six months off so to play five matches in a row (from qualifying) and still feel OK is really great.

“I had a full time corporate job and I thought I was done for good. I only started playing again in January. I have such a clearer mind now because I just wasn’t enjoying it when I quit, so this is awesome.”

Hibino has spent the last eighteen months comfortably inside the world’s top 100, only recently slipping below that mark. She has posted wins over several notable opponents including two victories over Australia’s Samantha Stosur.

“I came through juniors with (Hibino) so I kind of knew her before,” Myers said. “But I actually researched her after the match today and saw she beat Stosur in January. It just shows where I can get to, so it’s very exciting.”

Myers will now face in-form Brit Gabriella Taylor for a coveted place in the semifinals – the No.7 seed a comfortable 6-3 6-3 winner over China’s Jia-Jing Lu.

“She is tough, she has played a lot of matches and won a few tournaments recently,” Myers said of her upcoming opponent. “But if I play how I played today, then I might win.”

“I might not either, but I’m happy with where I’m at,” she added.

In other matches on Thursday, fourth seed Lizette Cabrera was tested against qualifier Kaylah McPhee but lasted the distance 7-6(6) 3-6 6-1. The Queenslander will now face Slovenian Dalila Jakupovic.