Luke Saville continues his impressive week at the USD$25,000 ITF Futures event in Renmark and will now face Marc Polmans in Sunday's final. 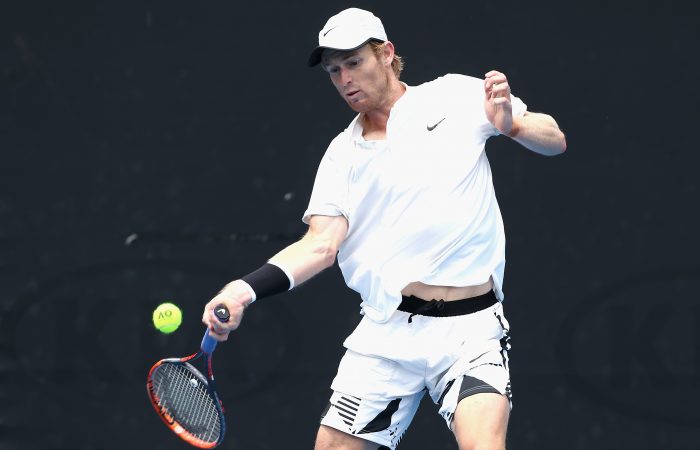 South Australian Luke Saville has delighted fans in his home state after defeating good mate Ben Mitchell to reach the final of the Renmark Tennis international on Saturday.

Saville continued the solid form he has shown all week to take the match 6-2 6-3 in just over an hour.

Born in the Riverland region where the event is being held, the 24-year-old, seeded sixth this week, said it’s been nice to come home.

“I’ve had some really good support here this week,” he said. “I’m also feeling a bit more pressure before matches, but I’m embracing that. Once that first point has been played, I’ve really been very engaged in my matches and it’s all worked out so far.”

The former world No. 152 has started 2018 brightly, winning the doubles title at the ATP Challenger event in Kyoto last week with Jordan Thompson.

“I came here to focus on the singles though and I’ve really ripped in,” he said. “I’ve put in some good performances, so it’s been good.

“Last year I feel like I learned a lot of things about how I need to be in matches. I’m trying to just simplify a few things and just compete.

“I really feel like I’ve been building. This week I’ve managed to play pretty clean, serving well and putting pressure on. I’m hoping to keep it going tomorrow.”

Sunday’s final will pit Saville against top seed Marc Polmans, the Victorian enjoying a solid tournament himself on the back of a recent maiden ATP Challenger title in Launceston.

Polmans was clinical in his defeat of Harry Bourchier on Saturday, dismissing the Tasmanian fourth seed 6-3 6-1.

Saville said he expected a tough match. “He’s obviously playing great, and he’s the favourite on paper, but I’m very confident in my game, especially on grass. I’ll be doing everything I can to go out and get it done.”

“It would definitely be nice to take the title home, that’s for sure.”