Ash Barty is scheduled to play two Fed Cup singles rubbers as well as doubles with Casey Dellacqua this weekend - and is excited to be busy when representing the green-and-gold. 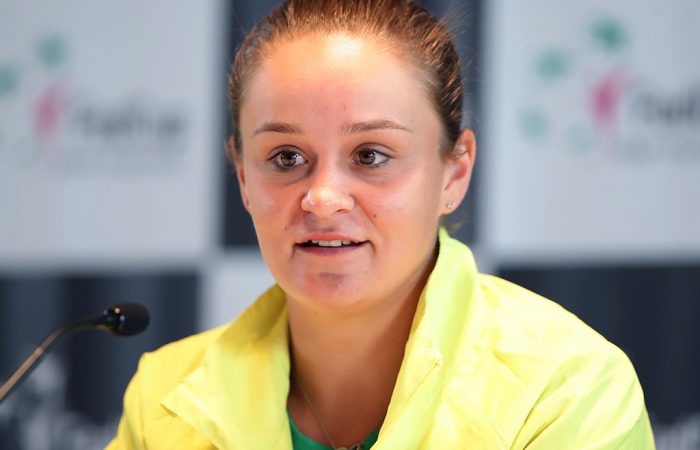 Australian No.1 Ash Barty is unfazed about a gruelling schedule for this weekend’s Fed Cup World Group II tie against Ukraine at the Canberra Tennis Centre.

The World No.16 opens the match on Saturday morning when she takes on world No.883 Lyudmyla Kichenok.

Barty will return to the temporary grass court on Sunday for the reverse singles rubber against 15-year-old sensation Marta Kostyuk, who reached the third round of the Australian Open last month.

The Queenslander may also be called into action again on Sunday alongside Casey Dellacqua if a doubles match is required to decide the tie.

“I think it’s exciting to be busy for a Fed Cup tie, you want to be representing your country and doing everything you can to get your team across the line,” Barty said.

“I’m not just speaking for myself when I say we’re very confident coming into the weekend.”

In Saturday’s second rubber, world No.26 Daria Gavrilova has the task of handling Kostyuk.

Kostyuk is spearheading the Ukraine team in the absence of several experienced stars, including world No.3 Elina Svitolina.

Kostyuk showed her Australian Open form was no fluke by winning the Burnie International in February – her second professional career title.

“I know she’s going to go out there and fight really hard, she’s a great mover and it’s going to be a really competitive match,” Gavrilova said.

Matches begin at 11am (AEDT) on Saturday and Sunday.