As Nick Kyrgios cruised to another victory for Australia, Alex De Minaur also impressed in his Davis Cup debut. 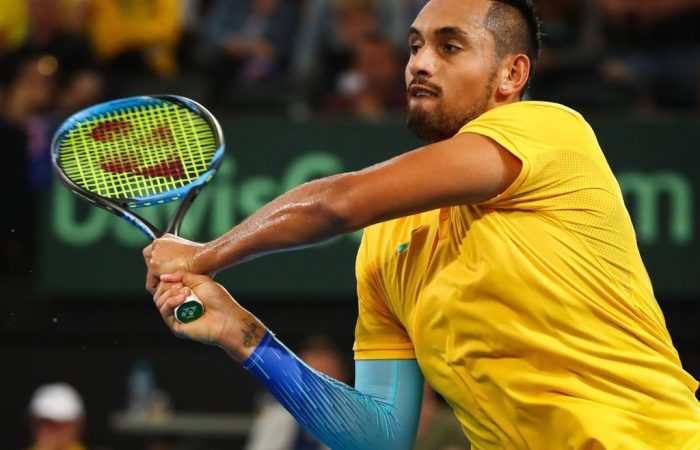 Australia have levelled the Davis Cup first round tie with Germany after Nick Kyrgios brushed aside Jan-Lennard Struff in straight sets in Brisbane.

Australian No.1 Kyrgios was in cruise control for much of the match, in an ominous sign for Zverev before they meet in Sunday’s reverse singles.

Kyrgios was at his nonchalant best, oozing confidence after a stellar summer run which included a Brisbane International triumph last month – his first ATP tour win on home soil – and an Australian Open fourth round finish.

“I just looked after my serve tonight well and that’s it,” said Kyrgios, who hit 21 aces to just one double fault.

“I took my chances when they came.”

Australia will look to take a 2-1 lead in Saturday’s doubles when Matthew Ebden and John Peers take on Peter Gojowczyk and Tim Puetz.

Lleyton Hewitt enters the final two days of the tie after some commanding performances from his young team.

“It was good. Quality tennis in both matches,” said the Australian Davis Cup captain when asked to summarise the day.

” I thought De Minaur was fantastic. He went out there and left it on the court … we were close to pinching that one.”

Hewitt is further buoyed by the composure that Kyrgios shows under pressure as Australia’s No.1 man.

“Everyone expects him to take care of these matches … it’s not an easy thing to do. What he did today and how he served was fantastic.”

Australia looks to advance to the quarterfinals from April 6-8, in which the team will either host great Britain or travel to face Spain.