Australia's Fed Cup team set to play Ukraine between 10-11 February has been named. 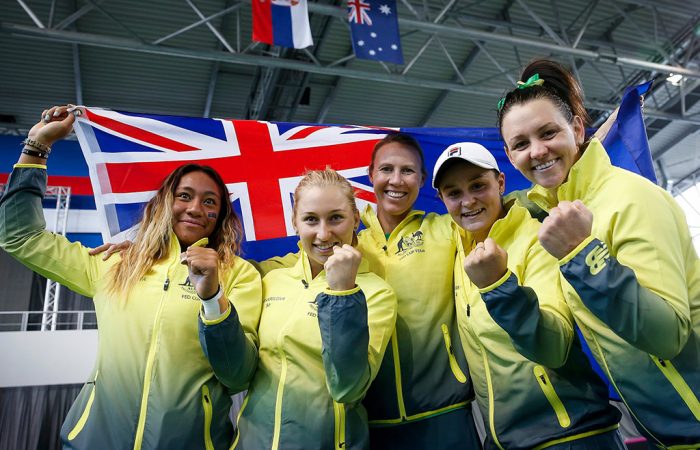 Ashleigh Barty (Qld) will lead Australia’s charge against Ukraine in Canberra at the Fed Cup by BNP Paribas World Group II first round on 10-11 February 2018.

The tie will be played on a purpose-built grass court at the recently redeveloped Canberra Tennis Centre.

“This is one of the strongest Fed Cup teams we’ve had in many years – there’s no doubt about it, we will be playing to win and return to the elite world group,” Australian Fed Cup captain Alicia Molik said.

“I’m incredibly excited about this group of women. They are all great competitors and love donning the green and gold and coming together to represent their country.

“Both Ash and Dasha had a successful 2017 – they had some breakthrough results and have achieved career-high rankings.

“Casey of course brings a wealth of experience along with her doubles expertise, and Destanee has shown us all she’s got a big game. She already has the ability to compete at the highest level and at just 17 years old, she’ll benefit a lot from being around this incredibly professional group.

“We have a great tradition of bringing the next generation of players into the team and Lizette Cabrera (Qld) will join the squad as a hitting partner.

“I know all the players are looking forward to next week as much as I am and we can’t wait to play in front of an enthusiastic home crowd.

“It’s such an advantage to play on home soil, and somewhat of a luxury for us. This is our first home tie for nearly two years – we’ve mostly played Fed Cup ties away in Europe during this time and we’ve really missed having the support of the local fans,” Molik continued.

Two-day ticket packages available through Ticketek are $80 for adults, $63 for concession card holders, $25 for children and $186 for a family pass.

The ACT Government is proud to support the Fed Cup by BNP Paribas World Group II First Round between Australia and Ukraine. The tie features across Visit Canberra’s events channels – when you take a trip to Canberra, prepare for one good thing after another, with world-class dining, iconic national treasures and breathtaking natural beauty.