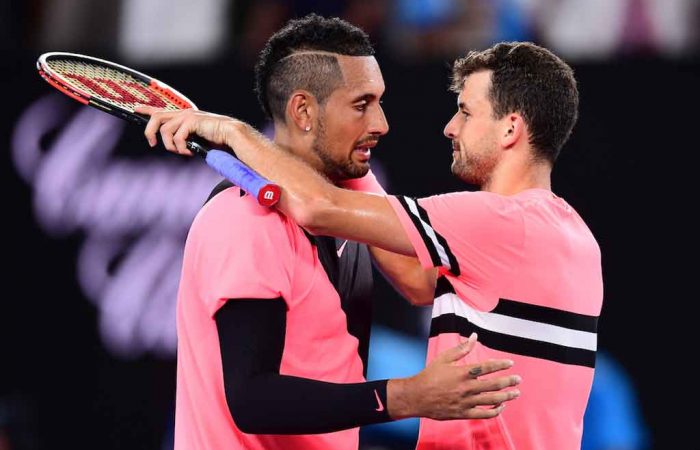 “Believe, believe you can win this,” insisted Kyrgios as the duo embraced at the net following their absorbing battle.

Kyrgios prevailed against the world No.3 over in the Brisbane International earlier this month, but the ATP World Tour Finals champion put in an accomplished display to oust the leading Australian charge.

“Playing against Nick is always tricky,” said Dimitrov. “He was serving unbelievable, he was competing hard. He deserves a lot of credit, he fought really hard. You have to be so locked in and take any opportunity you have against Nick. I’m just glad to get through.

“I learned that I can switch to another gear when I really need it. I think this is something that I have been struggling with this tournament. But today I was just able to overtake my game completely differently.”

Kyrgios sent out a warning sign with a barrage of forehand winners in a five-minute opening hold for the Bulgarian.

However, the Australian was forced to fend off three break points at 2-3 to keep apace.

Locked at 5-5, Kyrgios whipped round a curling forehand pass down the line, but the third seed was defiant to force a tiebreak, which he claimed with consummate ease.

A brace of bruising backhand winners down the line opened the door for Kyrgios, but once again the world No.3 refused to relinquish serve.

The Bulgarian picked off Kyrgios at the net to clinch a commanding 5-3 advantage. With the pressure mounting, the world No.17 denied Dimitrov the set with a ferocious forehand whipped past the Dimitrov backhand wing.

A deflected backhand down the line chalked up a maiden break point of the match for the home charge, en route to assuring another tiebreak with his 18th ace.

Dimitrov’s graceful saunter to the net put 3-1 on the scoreboard, before his full repertoire of shots teased the errors from the Kyrgios racquet.

All hope of an Australian title tilt appeared to be fading, until the 22-year-old converted a 3-2 break lead. Serving for the set, the pumped-up No.17 seed struck a breathtaking combination of ace, forehand winner, ace, ace to extend this pulsating encounter.

The turbulent start to the fourth set culminated with Kyrgios netting a mid-court smash for a break at 4-3.

A crisp backhand redirected down the line was the catalyst for Kyrgios to immediately break back. Moments later a hold to love sent the ardent local crowd into raptures.

Outstanding retrieval at 3-3 in the tiebreak dealt a fatal blow to the Kyrgios resistance, before a magical lunging cross court forehand passing shot sealed Dimitrov’s passage into the quarterfinals to tackle the challenge presented by Great Britain’s Kyle Edmund.

“I also played Kyle in Brisbane two weeks ago,” added Dimitrov, attempting to reach the semifinals for successive seasons. “I just have to be really focused with my side of the court. I’m happy that I switched up another gear tonight and hopefully next match I can do even better.”

Despite a painful loss at his home Grand Slam, Kyrgios was able to pay tribute to his fledging opponent.

“Obviously I knew it was always going to be tough. He’s been playing great. I think with him, he hasn’t even found his best form yet and he’s still getting through all those matches, which is pretty frightening. I think once he finds his feet and he has more confidence, he’s got a real chance at winning it,” said Kyrgios.

“It was only a couple points in it, you know. It wasn’t like I got demolished out there or anything. I had a lot of chances to win the match and I just came up short. Obviously it’s frustrating but it is what it is.”