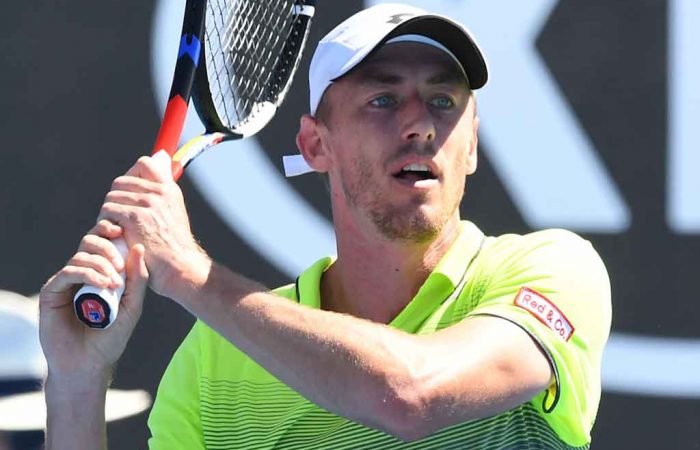 It was #Millmania on Show Court 3 at AO2018 on Wednesday, with John Millman putting in a monumental effort before he was eventually ousted 7-5 3-6 6-4 6-1 by 28th seed Damir Dzumhur.

The Bosnian and Herzegovinian, seeded at a Grand Slam for the first time, forced Millman to retrieve three smashes in one point, en route to an immediate 2-0 break lead.

Eight straight points for the home favourite restored parity at 4-4. However, world No.30 Dzumhur demonstrated exemplary court coverage to accelerate through five successive games to lead the second set 2-0.

The duo became embroiled in a tight contest at Shenzhen in 2017, which Dzumhur clinched in straight sets, and they tussled in another turbulent affair on Wednesday.

Down 1-3, Millman connected with several arrowed groundstrokes to go on his own run.

In one point, Millman was wide of the tramline, cutting a slice over the net post, before racing to the forehand side to rifle a winner down the line. This time, six consecutive games levelled the intriguing battle and earned an early 1-0 advantage in the third.

Undeterred, Dzumhur began to persistently pick off the Aussie at the net to storm onto the third round.

Matt Ebden’s dreams of a maiden Grand Slam third round were quashed by 2011 quarterfinalist Alexandr Dolgopolov 7-6(0) 6-3 6-4 on Wednesday night.

The world No.78 started brightly and struck a scorching forehand return winner over the net post to cancel out an early break.

Ebden then had two major chances to steal a break lead, but Dolgopolov kept finding the acute angles with crisply struck groundstrokes to stay on course.

At 5-5 Ebden illustrated remarkable retrieval and was rewarded with the chance to serve out the set after the Ukrainian netted a routine smash.

World No.37 Dolgopolov ramped up the aggression and claimed 11 successive points to grasp the first set and the initiative.

The Ukrainian is a blistering front runner and utilised his 49 winners, along with 18 successful surges to the net out of 25 attempts, to accelerate into the last 32.