Stosur ready for Open No.16

Hope springs eternal for Samantha Stosur, who lines up for her 16th Australian Open this week. 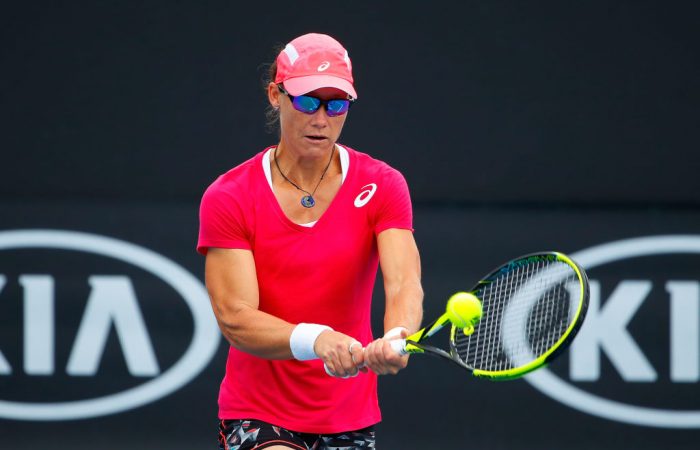 Hope springs eternal for Samantha Stosur, who lines up for her 16th Australian Open this week.

In her previous 15 appearances, Stosur’s best result has been two fourth-round appearances.

She’s set herself that same goal – to make it through to the second week – in 2018, refusing to be downbeat on tournament eve.

“My results here in Australia, they’re a challenge for me sometimes,” the 33-year-old Queenslander said.

“But I feel like I’ve done what I can to put myself in a good position. I’ve just got to go out there and enjoy it, go for it and play the way I know I can play. If I can do that and I lose, so be it. I just want to take care of what I can and hopefully that means lots of wins.”

The 2011 US Open champion and crowd favourite must negotiate a tough first-round draw.

“She’s a dangerous player … a little bit up and down since (Rio) but she proved she can put it together in a big event,” she said.

“She’s got a big game: lots of aggression, lots of power. I know I’m going to be sometimes up against it and I’m going to feel that.

“It’s going to come down to who can hit good first strike tennis, play big and take advantage of any opportunities.”

Stosur is back in grand slam action after an interrupted 2017.

She returned to Australia after a fourth-round French Open loss to eventual champion Jelena Ostapenko, when Stosur suffered a hand injury.

That allowed her the joys of a first Melbourne winter and slipped her ranking to world No.41 – outside of the Open seeds.

Again though the crowd favourite’s positivity shines through and she won’t be using her 2017 as an excuse for another Melbourne Park let-down.

“It’s not a position I would have chosen to be in but it was a good opportunity to freshen up, take a break,” she said.

“I did everything we’d set out to do in the pre-season … everything I can and need to and should have done.

“Now it’s a matter of trying to put it all together out there.”