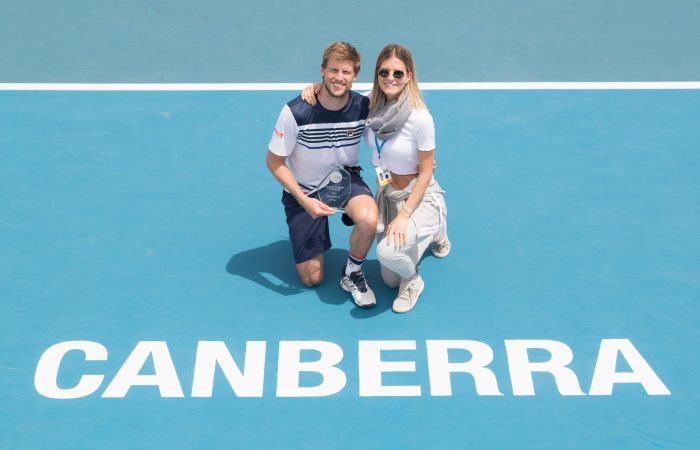 Italian veteran Andreas Seppi has claimed the East Hotel Canberra Challenger title with a three-set victory over Marton Fucsovics on Saturday. The world No.87 defeated the Hungarian sixth seed 5-7 6-4 6-3 to claim his eighth ATP Challenger title and first since 2014.

Seppi, seeded seventh, was only one point away from losing in the opening round of the tournament when he faced a match point against German Maximilian Marterer.

“It was an important week for me,” he said. “Especially after the first round, being match point down, and now holding the trophy. It’s very special for me.”

Seppi was first out the blocks in the final, breaking in the fourth game, but his opponent struck back hard, maintaining the pressure to take the first set. With the wind picking up, both players were finding the conditions increasingly difficult, but the Italian’s experience came to the fore, and he eventually sealed the match after a final rally of 20 shots.

Seppi will take plenty of confidence into Australian Open 2018 after defeating four top 100 opponents on the way to the Canberra title. “I had some great matches here, I improved my game every day, so I’m happy. Hopefully I can keep it up for Melbourne,” he said.

The 33-year-old has enjoyed some epic victories at Melbourne Park, last year turning the tables on Nick Kyrgios and famously ending the 11-year run to the semifinals of Roger Federer with his third round upset in 2015. This year, he faces French wildcard Corentin Moutet, some 15 years his junior, in the opening round.

Moutet was a first round casualty in Canberra, losing to Brazilian Nicolas Jarry.

“He’s a young player, I don’t know him very well, but he’s for sure talented. I am looking forward to the match.”

Meanehile, Fucsovics, the world No.85, will open his account in Melbourne against Moldavian Radu Albot.

The men’s doubles final was played on Friday evening, with second seeds Jonathan Erlich of Israel and Indian Divij Sharan defeating top seeds Hans Podlipnik-Castillo of Chile and Belarusian Andrei Vasilevski 7-6(1) 6-2. Both pairings will now head to Melbourne for the Australian Open, with Erlich a former doubles champion, winning the title in 2008 with countryman Andy Ram.