De Minaur was Sydney’s youngest finalist since Lleyton Hewitt won in 2000 at the same age. 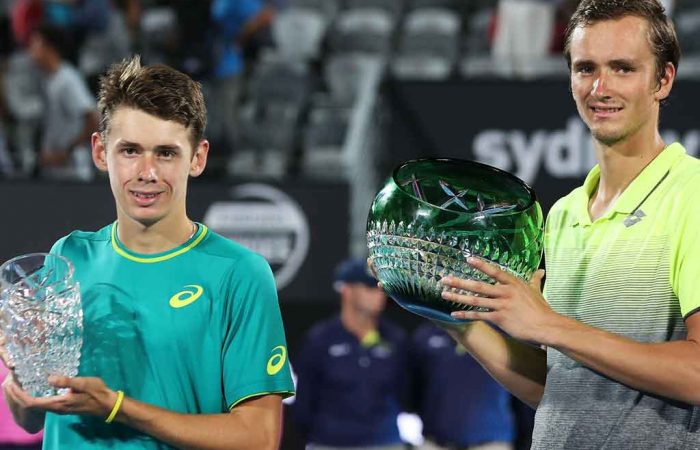 Alex de Minaur’s remarkable Sydney International run has come to an end after falling to Daniil Medvedev in a marathon three-set final.

The Australian teen sensation fought back from 4-0 down on Saturday night in a heart-stopping deciding set and saved a match point under immense pressure at Sydney Olympic Park.

But the stubborn Russian qualifier won the mental battle, eventually wearing the local favourite down to prevail 1-6 6-4 7-5 in two hours and 12 minutes.

Next to nothing has stopped de Minaur this year. Before this event, he had 11 of 12 matches and claimed six top-50 victims along the way.

Another in Sydney would have been a momentous occasion to savour, a first piece of silverware to reward the 18-year-old’s breakout fortnight.

It would have made him the youngest player to win the Australian Open tune-up tournament in almost two decades, since his mentor Lleyton Hewitt achieved the feat at the same age.

Saturday’s showdown was another demonstration of shot selection and composure well beyond de Minaur’s years, while his opponent, the 21-year-old Medvedev, produced some some breathtaking winners at crucial points to cement himself as a rising star.

As it stands, world No.167 de Minaur is the lowest-ranked Sydney finalist since No.223 Andrei Cherkasov in 1989.

That ranking is soon set to rise to No.127 as he embarks on an Australian Open campaign starting against Tomas Berdych.

By the match’s half-hour mark, de Minaur had already broken Medvedev three times and converted his third set point, much to the delight of the packed crowd at Ken Rosewall Arena.

But Medvedev lifted in the second set, cleaning up his unforced errors and pushing de Minaur to 3-3 before breaking the Australian’s serve amid several tense, long rallies, including one totalling 31 shots.

Down 5-3, de Minaur saved a set point and held serve but his opponent held his nerve to level the ledger.

De Minaur then endured a flat patch, going down 4-0 in the third set, only to defy expectations and fight back to 4-5 after a tension-riddled service game during which he saved a match point.

The comeback was on and he refused to surrender, breaking to level at 5-5, before Medvedev returned the favour and served it out to love to claim his first ATP title.