The 30-year-old entered the men's singles event at Melbourne Park for the final time before retirement. 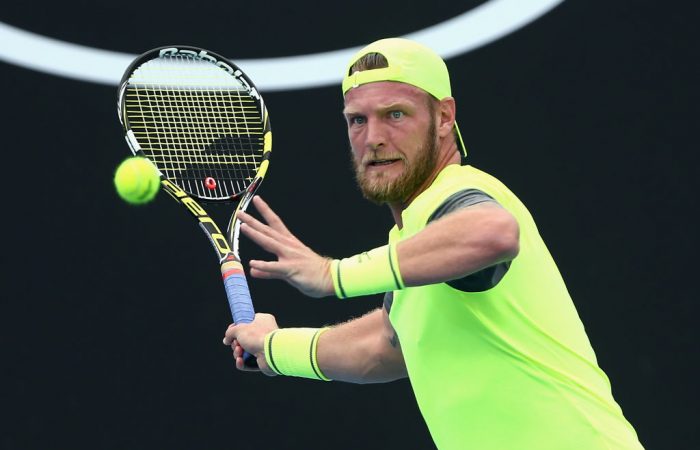 Sam Groth’s final singles campaign ended at the first hurdle at the Australian Open after the former world No.53 was ousted by American top seed Taylor Fritz on the opening day of the men’s qualifying draw, with the world No.92 prevailing 6-4 3-6 7-6(3) in an epic encounter.

The 20-year-old dominated proceedings early, going deep into many of Groth’s early service games before finally breaking through and serving out the opener. But errors began to creep into the Fritz game and Groth capitalised, breaking the young American in the eighth game before serving it out with his trademark booming serve.

The pair exchanged breaks in the final set, with both remaining rock solid on serve for the rest of the set to set up a tense tiebreak.

Groth gained the early advantage before Fritz took control to win seven of the last nine points to claim the match, ending the singles career of the Australian, who had announced that Australian Open 2018 would be his final tournament before retirement.

Groth will still feature at this year’s Australian Open: the 30-year-old is set to play doubles with Lleyton Hewitt and mixed doubles with Sam Stosur.

Tomic, playing his first Australian Open qualifying match since 2008, raced through the opening set, taking it in just 15 minutes for the loss of just one game.

The second took a little longer, but the Australian was a class above, closing out the match 6-1 6-3. He will meet Slovenian Blaz Rola in the second round.

Around the grounds at Melbourne Park, it was a mixed day for the rest of the home contingent, with Queenslander James Duckworth leading the charge after a 6-2 6-4 victory over combat Omar Jasika.

In just his second match back from a severe foot injury, the 25-year-old never looked troubled as he eased his way through to the second round.

Smith fell at the final hurdle of qualifying last year at the hands of Radek Stepanek but will be burning to reach his first Australian Open main draw since 2013. He will meet sixth seed Cameron Norrie from Great Britain in the second round.

It is just the second time Mousley has advanced the second round of qualifying at a Grand Slam, repeating last year’s effort before he fell to Korean Duckhee Lee in three sets.

The South Australian will meet Spanish world No.172 Ricardo Owed Lara in the second round, who is fresh off his first ATP quarterfinal in Pune last week.

The 24-year-old held the early break in the opening set before a young Mmoh, coming off a quarterfinal performance in Brisbane, pushed it to a tiebreak.

The Australian was never troubled from then on, running away with the second and setting up a showdown with Czech world No.227 Vaclav Safranek.

But there was heartbreak for 19-year-old Blake Ellis, who held multiple match points while serving for the match against fellow teenager Stefan Kozlov.

The Queenslander served for the match at 5-4 but was unable to convert his opportunities, however his performance against his American opponent, ranked 512 places above him, gives cause for great optimism in the future.

Banes was impressive early, dictating most of the points, before the Slovakian began to assert his authority, putting pressure on the Banes serve late in the match.

The loss was Banes’ fifth in the first round of qualifying for the Australian Open, but the positive from the result is that it is the first time he has pushed an opponent to a final set.

Former world No.39 Marinko Matosevic and Marc Polmans were also unable to claim victories in the opening round, falling to American Dennis Novikov and Barbadian Darian King respectively.