Nick Kyrgios is ignoring the hype about his game heading into the Australian Open. 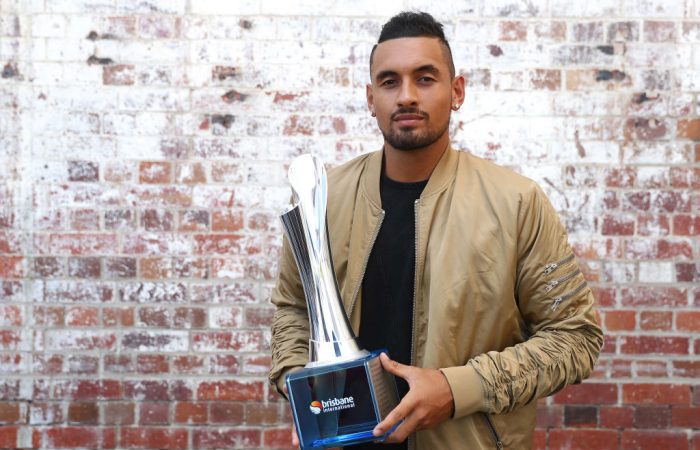 Nick Kyrgios has resolved to block out all external expectation surrounding his Australian Open chances as the in-form local ramps up for his Melbourne Park tilt.

But the 22-year-old, whose ranking rose to world No.17 on Monday, wasn’t willing to let any outside talk creep into his own mental calculations.

“It’s not easy, but I think there’s a lot of spotlight on a lot of guys.

“After winning Brisbane there’s going to be more expectation to do well, but I’m not going to think about it right now.

“I’ve got a good week to get into my groove and we’ll see what happens.”

That week starts now after making it through Monday night’s Fast4 exhibition tournament in Sydney unscathed.

Injury-prone Kyrgios was plagued by a knee injury during the Brisbane tournament and again played with strapping on Monday, though he insisted it did not pose any problems.

Should that good fortune continue, the priority will be ensuring his often-combustible mindset does not undo him as it did in last year’s Australian Open second-round exit, when the Canberra native’s composure and intensity unravelled to squander a two-set lead to Italian Andreas Seppi.

Kyrgios drew confidence from his ability to maintain focus throughout Sunday’s final triumph over Ryan Harrison, and planned to take a relaxed approached down to Melbourne.

“I’ll have a couple of light days now, head to Melbourne and get some good recovery, just enjoy Melbourne for a couple of days and then slowly get back on court and get ready,” he said.

“I’ve never really gone into the Australian Open winning a tournament or playing as well as I have been.

“So everything is there, I’ve just got to make sure my body is right and my mind is there.

“And who knows, I can do some good things next week.”