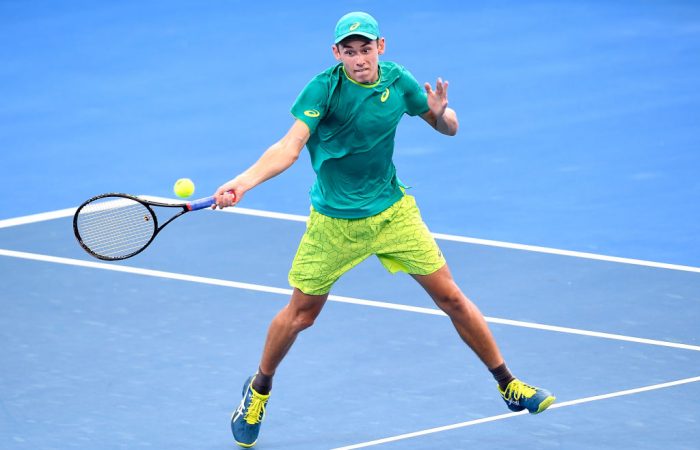 Australian teen sensation Alex De Minaur’s sizzling summer has continued with an upset win over Fernando Verdasco in the first round of the Sydney International.

Less than a week after reaching the semi-finals in Brisbane, the 18-year-old De Minaur showed off his trademark fighting qualities to beat the Spanish veteran 6-4 6-2.

He will now meet seventh seed and world No.30 Damir Dzumhur in the second round.

Just like his gallant run last week, the world No. 167 De Minaur made a mockery of the gulf in rankings by embracing the challenge of Verdasco’s cannon-like forehands.

The Sydney local got the home crowd going early when he broke Verdasco in the third game of the match, before keeping his cool to close out the set.

De Minaur refused to let up in the second, twice making inroads into the serve of the former world No.7 to reach the second round in Sydney for the second straight year.

Earlier, it was another Sydney-born Australian qualifier in Aleksander Vukic who pushed Spanish star Feliciano Lopez before succumbing 4-6 7-6 (7-5) 6-3 to the one-time world No.12.

Watched by Australian Davis Cup captain Lleyton Hewitt and the great Tony Roche, Vukic stood within two points of the biggest win of his career during the second-set tiebreaker.