Sam Stosur gives her verdict on the young group of Australians heading into the Open. 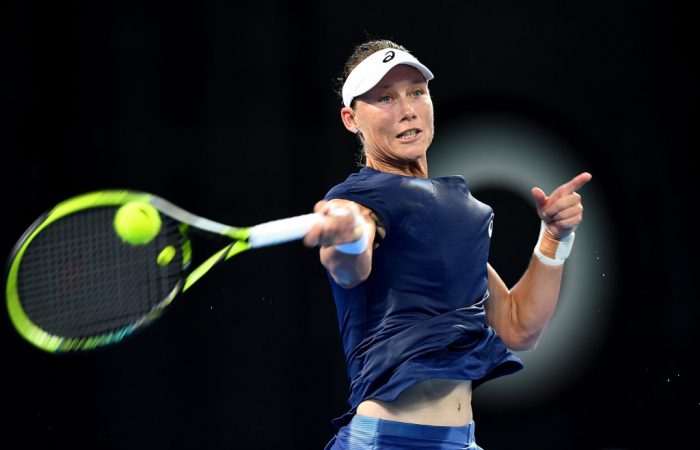 Daria Gavrilova has described Sam Stosur as a role model. Ash Barty says that in her own eyes, Stosur “will always be No.1”.

Stosur held the mantle of the nation’s top female player for an astonishing, unbroken streak of 452 weeks before Gavrilova finally leapfrogged her in June.

Soon to turn 34, Stosur has enjoyed a glittering career and is a vastly experienced, highly respected figure in tennis, both at home and abroad.

And she likes what she sees in her many young countrywomen emerging through the ranks.

“Jaimee (Fourlis) I’ve practiced with a couple of times,” said Stosur, who this week in Sydney has been practising with Barty.

“We played a set during my last practice in Melbourne and I got over the line against her – I could tell she was a little disappointed! I told her, don’t worry – it’s only practice, you’re playing really well.

“She’s getting better and better, and this is a great chance for her to play in Australia. She’s got some opportunities – she won the AO wildcard and she’s in Hobart this week, which is a good chance to get used to playing at this level.

“She wouldn’t be used to playing at the tour level all that much beyond last summer, and her French Open match. Now it’s a matter of stepping up and playing at that level more consistently.

“I’ve never practiced with Destanee (Aiava), but I practiced with Kim Birrell while she was on the Gold Coast – she was hitting the ball really well when we were up there.”

So how far can they go?

Stosur was wary of putting undue pressure on their young shoulders, but felt this group of rising teenage stars showed a great deal of promise.

“I think you’ve got to take small steps. Getting into the top 100 is often a big hurdle,” Stosur said.

“I know Lizette (Cabrera) was busting it, trying to crack the top 100 – she was in Asia every week, and it was really exciting to see her qualify and get through to the quarters at Guangzhou. I know Pri (Priscilla Hon) was there as well trying (in Asia doing the same), so I really impressed.

“I’m sure it will happen in the future if they keeps going the way they are.

“So yeah – you’ve got to be positive and back each other, and I’m sure all of them together and going to keep pushing each other to get better and better as well.”