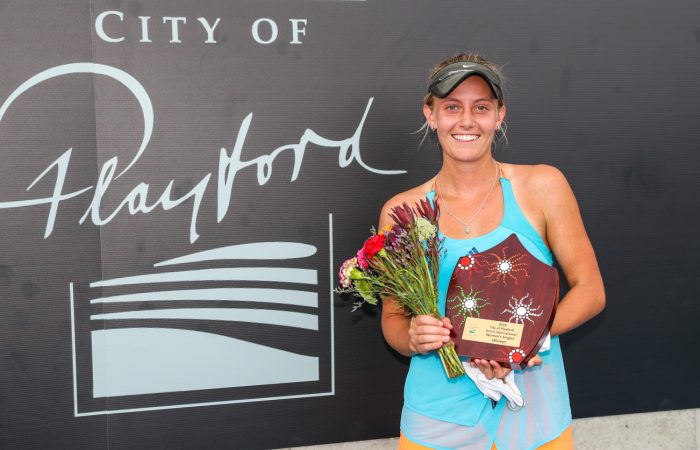 Wildcard Zoe Hives has won her maiden $25,000 ITF Pro Circuit title after edging past fellow Aussie Alexandra Bozovic in a thrilling three-set battle at the City of Playford Tennis International on Sunday.

“It hasn’t really sunk in yet, but I’m pretty excited,” Hives said. “(The win) helps a lot, but my plans won’t change. It just takes a little bit of pressure off me.”

The Victorian made a strong start to the final but was met with stiff resistance by the teenage qualifier who didn’t give an inch in her debut final; the two-hour-41-minute match eventually decided by a tiebreaker, 6-4 5-7 7-6(4).

In the end, it was Hives’ added experience that proved the difference, as the 21-year-old overcame the disappointment of holding three match points in the second set and then being required to manage bouts of cramp throughout the decider.

“It was definitely tough today, she made me work for it.” Hives said. “All credit to her, she just kept fighting.”

Both women enjoyed break-out weeks in Playford with Hives accounting for No.8 seed Bianca Andreescu of Canada and Czech sixth seed Marie Bouzkova, while Bozovic defeated No.5 seed Dalila Jakupovic of Slovenia during her seven-match winning streak.

Hives will now turn her focus to an upcoming doubles debut at Australian Open 2018, where she has received a wildcard with partner Alison Bai from Canberra.

The duo was taken out in the first round in Playford by third seeds Jessica Moore and Lin Zhu of China, who went on to make the semifinals before being ousted by eventual champions, the top-seeded pairing of Jakupovic and Russian Irina Khromacheva.