Thanasi Kokkinakis will get the perfect opportunity to gauge his playing level when he comes up against a pair of top-10 opponents later this week at the Hopman Cup. 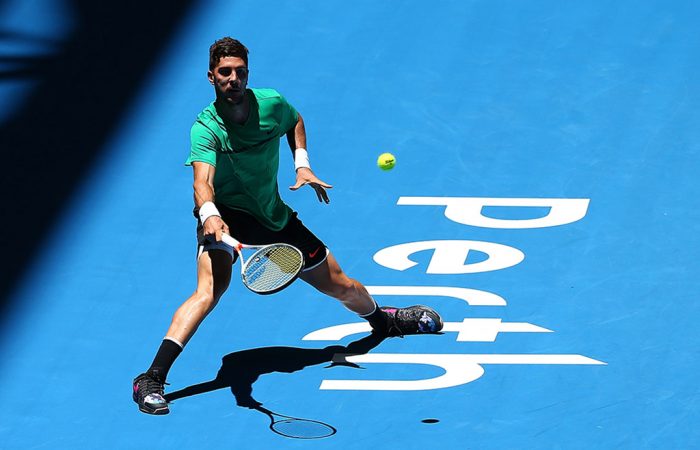 Rising star Thanasi Kokkinakis wants to play with more freedom heading into the Australian Open, and he’s ready to test his progress against two top-10 heavyweights this week.

Kokkinakis made a successful return to the court on Sunday with a three-set win over Canada’s Vasek Pospisil at the Hopman Cup.

Kokkinakis has been plagued by injuries over the past two years, and his No.1 goal in 2018 is to stay healthy.

But he doesn’t just want to make up the numbers on tour, and is desperate to make the most of his potential.

Kokkinakis will be back in action on Wednesday night when he takes on Belgium’s world No.7 David Goffin at Perth Arena.

Those two singles matches will give world No.208 Kokkinakis an excellent gauge of where he sits in the tennis pecking order.

“It’s perfect for me. I know both of the guys pretty well,” Kokkinakis said.

“Obviously with Vasek it’s going to be quicker points, he likes to come into net and trying to dictate, and so do I.

“So think there will be a bit more rallies in the next two games, but what perfect preparation coming into the Aussie Open.”

And despite battling shoulder, groin, elbow, and abdominal injuries over the past two years, he doesn’t feel like he’s gone backwards.

“I think I’m a lot better player than I was before I was injured,” Kokkinakis said.

“It will take some time to show that I think. A lot of times I’m playing free in practice and then not used to having the crowd and everything tightens up in matches a little bit.

“So that’s what I’ve got to get used to. I’ve got to start playing with that freedom again, but that’s just going to come with matches.”

Gavrilova will take on world No.36 Elise Mertens during Australia’s tie against Belgium.

Canada will take on Germany in Wednesday’s other tie.