A number of Australians made safe passage to the second round of qualifying at the City of Playford Tennis International on Saturday. Meanwhile, the ATP Challenger's top seed, Russian Daniil Medvedev, is ready and waiting. 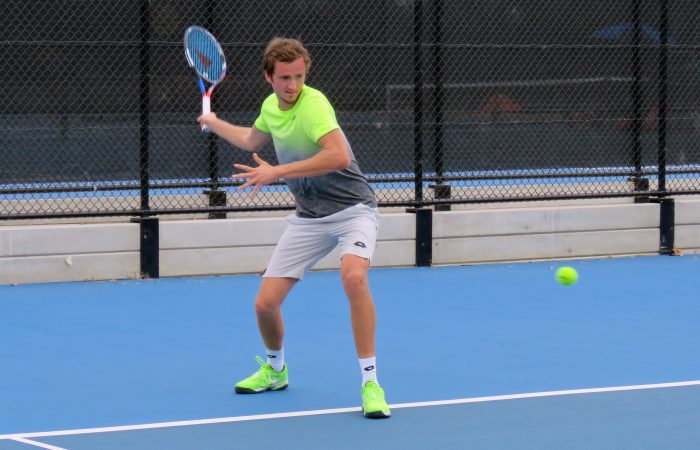 With qualifying underway this weekend, top-seeded Russian Daniil Medvedev has arrived at the City of Playford Tennis International feeling confident after a strong pre-season.

“I’ve been working hard,” the world No.65 said of the last month. “I’m looking forward to the season and especially the first tournament.”

Despite battling illness and injury during his first year on the ATP Tour in 2017, Medvedev, 21, proved himself an emerging talent, notably underscored by his opening round victory over Stan Wawrinka at Wimbledon.

“You never know what’s going to happen but as of this moment, I feel very good,” Medvedev said. “It was my first year and there were some really good wins for me. I’m quite happy about it and now I hope to have an even better year.”

Held for the first time at the brand new international-standard Playford Tennis Centre, the ATP Challenger event is a perfect lead-up for players looking to make their mark at the Australian Open Series events and the first Grand Slam of the year, Australian Open 2018.

“All the guys are playing so good now,” Medvedev said. “We decided to give myself the best opportunity to win a few matches, which is always good at the start of the year.

“Also, I’m already in Australia, so I can get used to the jet lag and the weather.”

Medvedev has a qualifier in the first round and if successful, will be on track for a potential quarterfinal against German Oscar Otte, the No.5 seed, with Henri Laaksonen (No.3) of Switzerland possibly lying in wait beyond that.

Australian wildcard Alexei Popyrin has also found himself in the top half of the draw. The talented teenager – a winner of the 2017 French Open junior title – meets American Evan King first up.

A number of Australians make up the bottom half, with Max Purcell and Omar Jasika facing off for a chance to play either fourth-seeded Ukrainian Sergiy Stakhovsky or rising American Tommy Paul.

Meanwhile, Marc Polmans has drawn the second seed, American Bjorn Frantangelo, with the winner to potentially play recent Australian Open 2018 wildcard recipient Alex Bolt. The South Australian native will have the crowd behind him in his opening encounter against a qualifier.

In first-round qualifying results on Saturday, another pair of local favourites in Luke Saville and Bradley Mousley both navigated their way safely to the second round with recent Australian Pro Tour title winners Andrew Harris and Jason Kubler following suit.