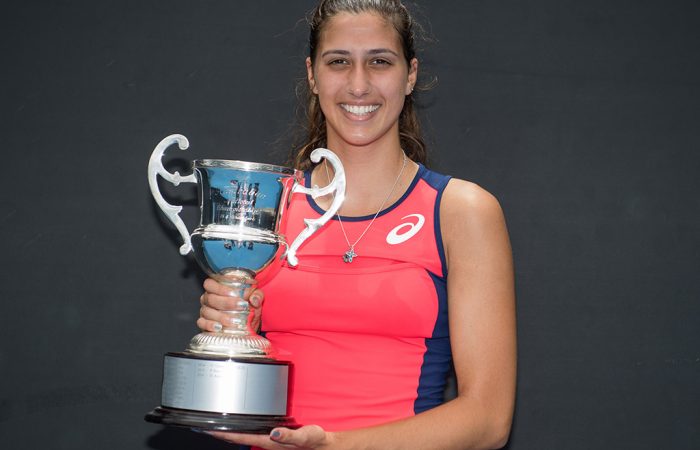 Eighteen-year-old and world No.322 Jaimee Fourlis (Preston, Vic) has been awarded an Australian Open 2018 wildcard after winning the 18’s Girls’ Australian Championships today.

“I’m just really happy to get the win today,” Fourlis said after the match.

“Coming out here today, I just had to play my game, I had to play solid, I had to trust myself – my belief was really big out on the court.

“I knew she was going to come out firing. Destanee’s an incredible player and we’ve seen her play big and strike the ball unbelievably.

“I just had to trust myself and knew what I had to do. I had a great game plan, sat down with my coach before the match… and I can say I executed it pretty well.”

Fourlis said her experiences over the past 12 months have boosted her confidence, “The experience from Australian Open, and winning a round, and playing a great match at the French Open against Wozniacki. It definitely does build and you do get more confidence as you play.”

On talking about the upcoming Australian Open, “I’ve got nothing to lose – I’ll be one of the lowest-ranked players in the draw. I’m going to enjoy it, I have a Grand Slam in my back yard, I train here every day so it’s unbelievable just to play in one.”

Aiava will now have a second opportunity to compete for a wildcard at the Australian Open 2018 Play-off next week.

The Australian Open 2018 Play-off will start on Monday 11 December, with both the men and women finals to be held on Sunday 17 December.

The official draw will take place tomorrow, Sunday 10 December from 12.15 pm. Media are invited to attend.

Live scores will be available here and live streaming via tennis.com.au.