Tickets on sale at 9.00 am Friday 8 December via Ticketek. 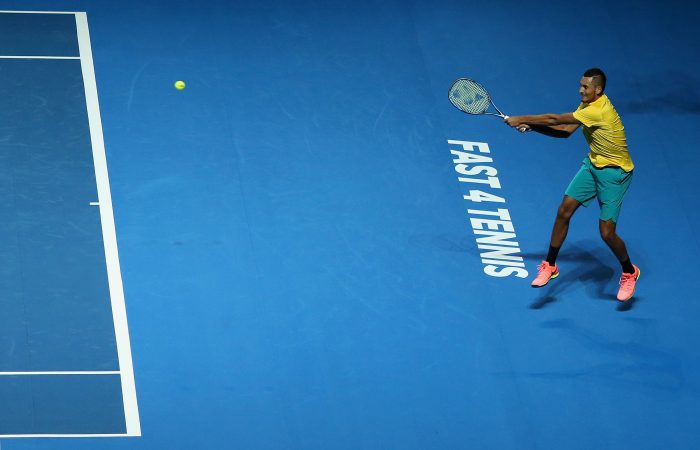 Three of the world’s electrifying tennis talents, Nick Kyrgios, Grigor Dimitrov and Alexander Zverev will star in the next instalment of FAST4 Tennis with the innovative event returning to Sydney for the fourth consecutive year.

The FAST4 Showdown, which has attracted sell-out crowds each year, will be held for the first time at Ken Rosewall Arena at Sydney Olympic Park Tennis Centre on Monday 8 January 2018 during the Sydney International.

World No.21 Kyrgios, who defeated current world No.1 Rafael Nadal at the 2017 edition of FAST4 is a declared lover of innovative tennis formats and is pleased to be returning to the Harbour City.

“Playing the FAST4 Showdown was a lot of fun in Sydney and I’m looking forward to playing again and this time at Ken Rosewall Arena,” Kyrgios said.

Kyrgios will star alongside world No.3 Dimitrov and world No.4 Zverev, two of his friends on the men’s tour.

“The level of play was really high and I’m expecting it to go to an even higher level with guys like Dimitrov and Zverev competing.

“I’ve known Sascha Zverev for a long time, we played juniors together. He’s played great tennis this year and done all the right things, he’s a total professional.

“It’s been great to see Grigor get back to his top form and finish the year at No.3 in the world. He really helped me a couple of months ago and to see him have such a successful end to the year – it couldn’t have happened to a more deserving guy.”

The Australian likes the excitement and thrill that FAST4 Tennis brings to the game of tennis.

“FAST4 is a bit different to what we usually face on tour. It brings the pressure points or big points earlier which is fun to play, and also a lot of fun for the crowd – it’s fast and exciting,” Kyrgios added.

“It’s no secret I really enjoy the atmosphere of a big crowd and playing FAST4 this year was a fun experience. It’s great to promote this format and be a part of it.”

Kyrgios’ impressive performance at the FAST4 Showdown in January was an omen for the season ahead which saw him thrive in Davis Cup, leading his country to a semifinal against Belgium and leading Laver Cup’s Team World to a deciding match against Team Europe when he pushed 19-time Grand Slam champion Roger Federer to three sets.

Individually, season 2017 saw Kyrgios earn his 100th tour-level win in Cincinnati. In total he claimed four wins against players ranked inside the top five, including two wins over then-world No.2 Novak Djokovic in Mexico and Indian Wells. The 22-year-old made two ATP finals and won a total of 31 matches.

Twenty-six-year-old Dimitrov finished 2017 as the ATP World Tour champion after enjoying his career best season and finishing the year at a career high ranking.

The Bulgarian doubled his career title haul to eight after winning the Brisbane International, the Sofia Open, a maiden ATP Masters 1000 title in Cincinnati as well as a semifinal appearance at the Australian Open.

The 20-year-old claimed landmark wins over Federer, Djokovic and Stan Wawrinka and has already amassed 11 wins over top-10 opponents in his career.

Tennis NSW CEO and Sydney International Tournament Director Lawrence Robertson said he is delighted to welcome the FAST4 Showdown to Ken Rosewall Arena at Sydney Olympic Park Tennis Centre for the first time.
“I’m really excited that we’re going to have the FAST4 Showdown as part of our overall offering in what is going to be a fantastic week of tennis in January,” Robertson said.

“The players have really embraced it as it gives them an opportunity to express themselves in a different way. It’s clear that Nick Kyrgios really enjoys playing alternative formats and we also saw that with Sascha Zverev in Prague at the Laver Cup. That’s thanks to all of the work Tennis Australia have done to create new formats that further engages fans.

“Dimitrov has also been a fan favourite for many years. He’s really developed both as a player and as a person and we are excited to see his style of tennis again in Sydney.

“We really welcome and appreciate the support we’ve had from Destination NSW. We’ve worked closely together on the evolution of FAST4 and making the event part of the Sydney International is the next step for us in our journey with them.”

“For the past three years Sydney has hosted some of the greatest tennis players in the world, including Roger Federer and Rafael Nadal, and three consecutive sold out crowds have shown just how popular this event is,” Marshall added.

“Sydney is the place to be for sports fans this summer, with FAST4 Tennis and the Sydney International joining an already stellar line up of events, including international cricket, the Sydney Sevens and the Wigan Warriors and Hull FC rugby league double header.”

FAST4 Tennis is a modified tennis format launched globally in Sydney in 2015 by Roger Federer and Lleyton Hewitt. The fundamentals of the game remain the same with four innovative rules to ensure tennis matches are fast, competitive, exciting and can be completed in a short period of time.

Players play lets, there is no ad scoring, a tiebreak is played at three games all and the first to four games wins.

Tickets for FAST4 Showdown go on sale today at 9am Friday 8 December via Ticketek. Adult prices start at $39 and $10 for children. Family passes start at $88.

The Sydney International 2018 and FAST4 Showdown are supported by the NSW Government via its tourism and major events agency, Destination NSW.