Fourlis, Aiava off to winning starts

Jaimee Fourlis and Destanee Aiava got off to the perfect start in the 18/u Australian Championships on Tuesday, winning two matches in straight sets to lead their round-robin groups. 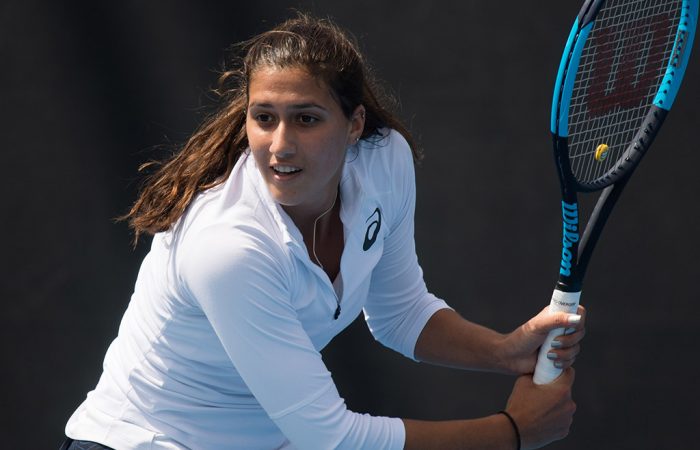 Victorians Destanee Aiava and Jaimee Fourlis both had successful starts on Tuesday in their quest to win a wildcard into next year’s Australian Open.

Aiava and Fourlis are the No.1 and No.2 seeds in the 18/u Australian Championships, with the winner gaining direct entry into the first Grand Slam of the year in January.

All competitors in the 18/u round robin stage of the event had two matches on Tuesday because of this week’s rain delays.

Aiava defeated Queensland’s Lisa Mays 6-0 6-1 in her first match, and was too strong for another Queenslander, Olivia Gadecki, in the second, winning 6-2 6-3.

With former Australian Open quarterfinalist Jelena Dokic in the crowd on Court 7, Aiava said it felt great to be back at Melbourne Park playing again.

“I like playing at home, I’ve been coming here since I was eight,” she said. “I was pretty nervous playing the first match but once I got onto the court I started to get comfortable and I was very happy with my game.”

Fourlis praised Tennis Australia for giving the winner of the 18/u girls singles a wildcard into the Australian Open.

“It’s such a big opportunity, I would like to thank Tennis Australia for putting this up for grabs, it’s such an awesome opportunity,” she said.

On the boys side, No.1 seed, Victorian Matthew Dellavedova, had a strong start to his tournament, winning two matches in the round-robin stage.

Both the 18/u and boys’ and girls’ singles competitors will have three round-robin matches each, before the top two from each of the four groups advance to the knock-out stage, which starts on Thursday.

In the 14/u Australian Championships girls’ singles event, No.1 seed Anastasia Berezov from New South Wales advanced to the quarterfinals after defeating Ayaka Koga from Japan 6-2 6-2.

She will play West Australian Lauren Nikoloski for a shot at the semifinals, after Nikoloski defeated South Australian Maggie Pearce 6-4 3-6 [10-5].

The final of the 18/u singles events will be contested on Saturday at Melbourne Park, with fans encouraged to come to Melbourne Park to see who will win that all important wildcard into the Australian Open women’s singles tournament.