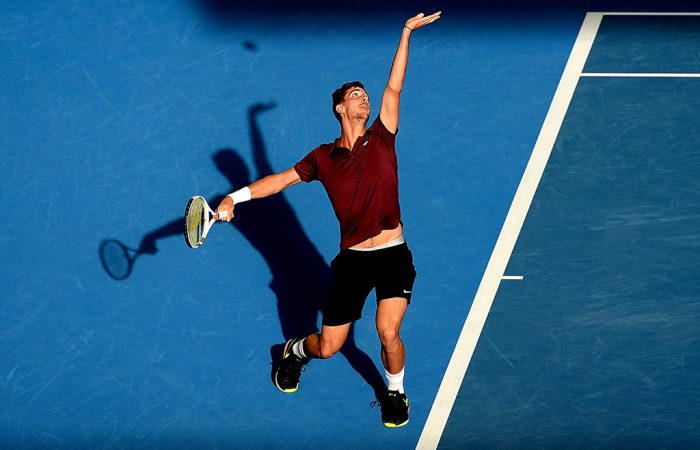 Adelaide’s very own Thanasi Kokkinakis is set to make his homecoming for the World Tennis Challenge from 8-10 January 2018 at Memorial Drive.

The popular South Australian hit a career high ranking of No.69 in 2015, but his rise was hampered by injury leaving him on the sidelines for almost all of 2016.

The right-hander most recently reached the final of Los Cabos, Mexico in August 2017, defeating Tomas Berdych (CZE) in the semifinals.

“I always enjoy playing in Adelaide in front of my home crowd and I’m looking forward to getting some quality matches ahead of the Australian Open.”

General Manager World Tennis Challenge David Hearne said: “Thanasi’s talent is undeniable and we are thrilled to see him back on court here in Adelaide in preparation for his Australian Open campaign.

“Thanasi is always a crowd favourite and no doubt the South Australian fans will embrace him when he returns.

“With such an incredible field, we’re encouraging fans to get in early so they don’t miss out on this amazing opportunity to see the players take to the court at Memorial Drive but also make appearances at the World Tennis Challenge Legends Lunch.

“With tickets starting from just $11 for adults and $6 for kids, there is really no better place to watch world-class tennis this January.”

South Australian Tourism Commission Chief Executive Rodney Harrex said, “We’re thrilled to have another ace line-up in 2018. Thanasi Kokkinakis is part of the South Australian tennis family, and to have him serve on his home turf for Team Australia is a great coup for local fans.

“Adelaide has so many great experiences to offer sport and event fans in January and 2018 is going to be extra special, with tennis legend Andre Agassi among the champions playing at Memorial Drive.

“The World Tennis Challenge kicks off the summer event season and I encourage everyone to check out our calendar of sport and enjoy the atmosphere of Adelaide in full swing.”

Tickets are on sale now via Ticketek. For more information, visit worldtennischallenge.com.