Local favourite Sam Stosur and big improver Caroline Garcia will kick off their 2018 seasons at the Brisbane International. 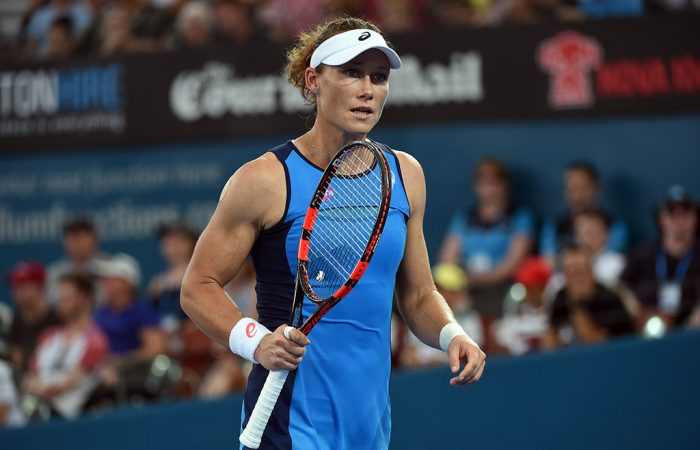 Queensland’s own Sam Stosur and world No.8 Caroline Garcia (FRA) have confirmed they will start next season at the 2018 Brisbane International presented by Suncorp.

For Stosur, 2018 will be the eighth time she’s played Brisbane in front of a home crowd, her favourite way to kick off the Australian summer of tennis.

“It’s always special for me to be able to start the season at my home event, the Brisbane International,” Stosur, the world No.41 said.

“Pat Rafter Arena is one of my favourite stadiums to play in, you’re so close to the fans and you can feel the energy.

“I can’t wait to get back on court, and it’s going to be another incredibly strong line up in Brisbane which is a great way to test yourself leading into the Aussie Open,” she added.

Meanwhile, 24-year-old Garcia is returning to the tournament for the first time since 2015.

“I’m thrilled to be coming back to Brisbane in 2018, starting the season in Queensland is definitely something I’m looking forward to,” Garcia said.

“I want to do everything I can to be ready for the Australian Open, and there’s no better way to prepare than at the Brisbane International.

“It’s going to be a really strong field at Brisbane which is a great way to test yourself at the start of the season. I’m looking forward to getting back on Pat Rafter Arena.”

Garcia finished 2018 with back-to-back in Wuhan and Beijing, results which elevated her her into the elite eight-player field at the WTA Finals.

The right-hander is the third female player inside the top 10 confirmed in the Brisbane women’s draw.

Tournament Director Geoff Quinlan says it was wonderful to be welcoming both players back to Brisbane.

“Sam is one of the most loved and supported players in Queensland and fans will be delighted to welcome her back in 2018. The atmosphere in Pat Rafter Arena always goes up a gear when Sam is on court,” Quinlan said.

“Caroline Garcia is another fantastic addition to our women’s line-up. At No.8 in the world she’s in career best form, winning her fifth title at the China Open in October.”

“With the addition of these two talented female players, the strength of next year’s field is sure to bring in the crowds,” Coddington said.

“Year-on-year this event continues to deliver strong tourism outcomes for our region, attracting nearly 100,000 spectators from across the country and delivering almost $10 million to the Brisbane economy.”