The defending titleholders, a reigning Grand Slam champion and a fan favourite will join a stellar starting list at the Sydney International in 2018. 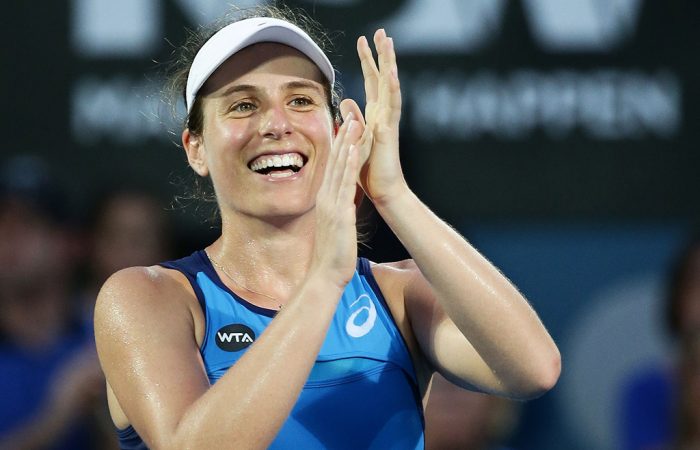 Defending champions world No.9 Johanna Konta and Gilles Muller, US Open champion Sloane Stephens and former world No.7 Fernando Verdasco will play the Sydney International in 2018.

Konta, who enjoyed a breakthrough season in 2017, will be making a triumphant return to where it all began when she returns to Sydney Olympic Park in January.

Konta followed this year’s Sydney title with a quarterfinal showing at the Australian Open. She went on to claim a second WTA Premier title in Miami, reached the final at Nottingham, and semifinals at Eastbourne and Wimbledon, achieving a career-high ranking of No.4 in July.

The British-based 26-year-old, who was born in Sydney and spent her childhood in Collaroy, says she is eager to return to Olympic Park where she will be bidding to become the first woman to win back-to-back titles at the event in eight years.

“Winning Sydney is one of my highlights of this year and really helped to kick start what’s been the best season of my career so far,” Konta said.

“I love coming back to play in Australia. The conditions suit my game and I think my results in Sydney, and reaching the Australian Open semifinals in 2016, and quarterfinals this year, bears that out.

“I have some wonderful memories of playing in Sydney. The tournament holds a special place in my heart and I can’t wait to come back and defend my title in 2018.”

As this year’s US Open champion, Stephens will add further Grand Slam-winning credentials to an already impressive women’s draw at the Sydney International.

The American completed an incredible comeback season in 2017, vaulting more than 900 places up the rankings from August to September, after almost a year out of tennis due to a left foot injury.

The 24-year-old reached back-to-back semifinals in Toronto and Cincinnati before becoming the first American without the surname ‘Williams’ to win a major since 2002.

Currently ranked world No.13, just two places off her career-high of No.11, Australian Open 2013 semifinalist Stephens said she is excited to play at the Sydney International for the first time.

“I’m really looking forward to kicking off my season in Sydney next year,” Stephens said.

“I’ve had great results in Australia in the past – reaching the semifinals of the Australian Open in 2013 was a real highlight – and I can’t wait to continue that form.”

Gilles Muller will return to defend his Sydney International title in 2018.

The 34-year-old enjoyed one of the best seasons of his career following his win in Sydney in January. He reached the final at Estoril in May, won a second title for the year at s-Hertogenbosch in June, reached semifinals at Queens and Atlanta, and the quarterfinals at Wimbledon, achieving a career high ranking of No.21 in July.

Muller will be joined in the men’s draw by former top 10 player Fernando Verdasco, the popular Spaniard returning to contest the event for the sixth time in his career.

A quarterfinalist at last week’s Paris Masters event, losing to eventual champion Jack Sock, Verdasco has played some of the best tennis of his career in Australia, including a classic five-set semifinal against Rafael Nadal at the Australian Open in 2009.

“Sloane’s return from injury this year has been one of the season’s great stories – a true fairytale comeback. Her performances in New York, defeating Venus, Madison Keys, Anastasija Sevastova, Dominika Cibulkova and our own Ash Barty were incredible. I can’t wait for her to bring that raw talent, drive and determination to Sydney.

“The women’s draw now features four women ranked inside the top 15, with some serious Grand Slam-winning pedigree in Venus, Ostapenko and Stephens. We’re looking forward to bringing that to the fans.

“I’m delighted to welcome our defending men’s champion back in 2018. Gilles’ journey to the title resonated with the fans this year. Fernando has long been a popular face with Australian fans and his addition to Sydney International 2018 should make for some entertaining tennis.”