Popovic a maiden qualifier in Bendigo 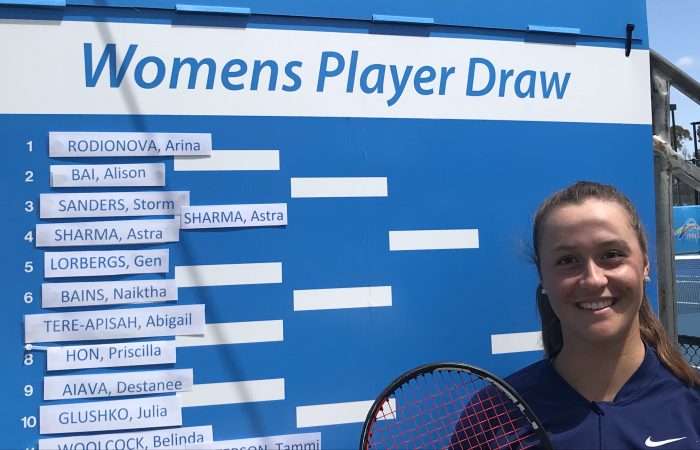 In reaching her debut $60,000 ITF event main draw, the 17-year-old was elated. “I’ve never felt this good in my entire life,” she said. “This is beyond any tournament I’ve had. I’ve competed in a few Pro Tour events, but not that many so far.

“I just got back from Hong Kong a couple of days ago, so considering the jet lag, I wasn’t in the best shape, but I decided to just do as well as I could, and it’s phenomenal.”

Popovic, who has a current ITF combined junior ranking of world No.219 – a career high, held her nerve in her last two qualifying matches, defeating Jovanovic 6-3 3-6 7-6(1) and, prior to that, Gabriela Da Silva Fick in two tight tiebreakers.

“I’m one to take things as far as it can go,” she said. “When I’m down, it just motivates me even more to come back.”

Popovic describes herself as an aggressive ball striker. “I’m a taller girl and I like to take the ball on the rise,” she said, adding that she’s not afraid to let her emotions out on court. “I show my opponent that I’m right there, I’m present, and I’m willing to do whatever it takes.”

Unsurprisingly, Popovic cites Serena Williams as a role model, “but I’ve always had Monica Seles in the back of my head. She’s my biggest inspiration”.

Standing in the way of a maiden main draw victory is American Jennifer Elie who Popovic admits she has never seen play. “Actually, I’ve never even heard of her before,” she said.

Alongside Popovic, fellow Australian Genevieve Lorbergs also qualified for the main draw, taking out Isabella Bozicevic in straight sets. The Victorian will face Naiktha Bains in the opening round.

With main draw action also commencing on Tuesday, winners included Kimberly Birrell – the Queenslander outlasting Swede Ellen Allgurin 4-6 6-3 6-1 – Zoe Hives, Tammi Patterson and Astra Sharma, who now awaits the winner of Arina Rodionova and Alison Bai. The top seed will be looking to turn the tables on Bai after losing to her last week in the Canberra Australian Pro Tour second round.

In the upset of the day in Bendigo, Sara Tomic bundled out the tournament’s No.2 seed, American Asia Muhammad, 6-3 7-6(2). She will now need to get past Frenchwoman Alize Lim to book her place in the quarterfinals.