Teenage Queenslander Blake Ellis impressive in winning through to the second round in Canberra while top seed Jordan Thompson is forced to withdraw through illness. 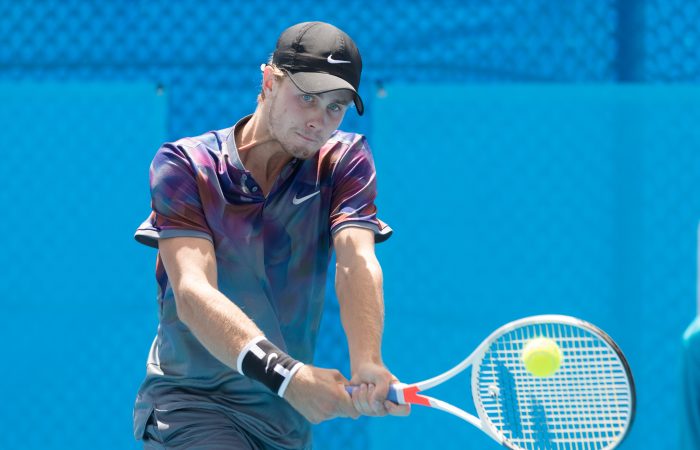 Wildcard Blake Ellis has enjoyed his first main draw singles win at ATP Challenger Tour level on Tuesday after defeating Austrian Lucas Mielder in the opening round of the Apis Canberra International.

“It feels really good. My first win after a few tries now,” the Brisbane teenager said. “I’m very happy with the result.”

“I was very aggressive today,” Ellis said. “I came to the net a lot and served well. I was able to win some easy points and keep the pressure on him.”

Ellis, who is coached by Wayne Arthurs, is the current world No.29 at ITF Junior level but left the underage ranks after Wimbledon this year with the 2016 junior Australian Open doubles title (with Alex De Minaur) already under his belt.

“From now on it will be a mix of Futures and hopefully a few Challengers as well,” he said. “Hopefully I can get myself up the rankings a bit and play some bigger tournaments.

“I’ve got the 18s Nationals coming up pretty soon too.”

First round action was well underway on Tuesday, with Ellis joined on the winner’s list by others including Matthew Ebden, Traralgon titlist Jason Kubler and runner-up Alex Bolt.

On a day where all the seeds on court advanced, Marc Polmans dug deep to edge out Dayne Kelly in a hard-fought battle 3-6 7-6(4) 6-3 while Queenslander Maverick Banes also came from behind to defeat Andrew Whittington 6-7(5) 6-3 6-2.

With top seed Jordan Thompson withdrawing from the event with tonsillitis, John Millman (No.7) will complete the opening round matches when he takes on Indian Sasi Kumar Mukund on Wednesday. The feature match on centre court pits Kubler (on a nine-match winning streak) in a first-time encounter with the eighth-seeded Omar Jasika.