Pliskova gets Aussie assistance through Stubbs

World No.3 Karolina Pliskova is this week being coached by Australian doubles legend Rennae Stubbs at the WTA Finals in Singapore. 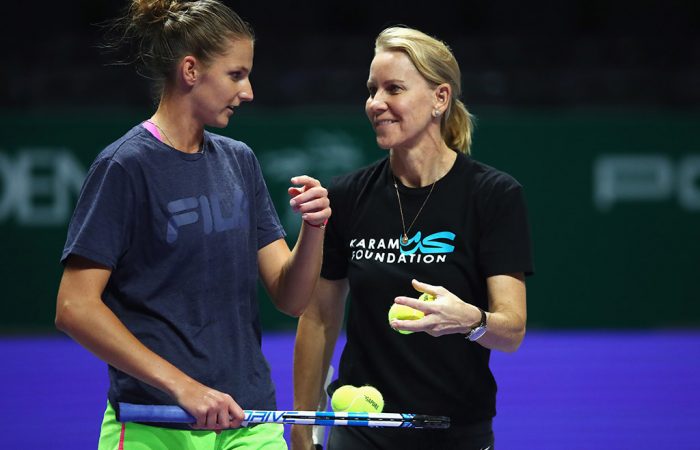 World No.3 Karolina Pliskova says she wasn’t even looking for a new coach, but is already having fun with Australian Rennae Stubbs in her corner.

Stubbs was something of a left-field pick by Pliskova to guide her career, with her only involvement in the game post-retirement being in the media.

But Pliskova says she only had her father guiding her through the latter stages of the WTA season after she split with her previous coach, David Kotyza, in September.

“We all know I was without coach in Asia. I was with my dad,” the former world No.1 said.

“I was already talking to (Stubbs) for a few weeks, and she said, ‘yeah, if you want to go, so let’s go to Singapore. So I said, Yeah, why not?

“I was actually not even searching for any coach before.”

Stubbs is one of Australia’s most successful female doubles players ever, having won four doubles Grand Slam titles and two mixed doubles majors.

And now Stubbs hopes to guide Pliskova to a win at the WTA’s season-ending tour finals in Singapore, starting on Sunday.

Pliskova is first up on court on day one, where she’ll take on Venus Williams.

She says it’s too early for Stubbs to have made wholesale changes to her game, but she is feeling the positive impact of the change.

“I feel like we are having fun. I feel relaxed on the court, which is the main thing for me. I think it’s working pretty well,” Pliskova said.

Pliskova and Williams have only played twice before, with the last time being at last year’s US Open in the round of 16.

On that occasion, Pliskova emerged victorious, grinding out a victory that ended in a third-set tiebreak.